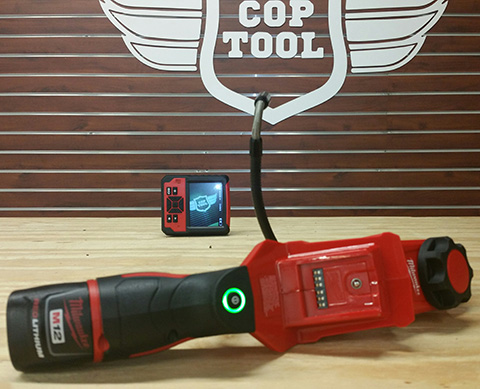 Several of the power tool companies have launched inspection cameras with varying degree of success. With Milwaukee Tool’s focus so much on the Plumbing and Mechanical trades the need to offer a great inspection camera on the M12 Battery Platform is pretty critical. The redesigned M-Spector, now known as the M-Spector Flex is offered in 3 configurations with basic 3’ head 2315-21 ($479), 9” head 2316-21 ($499) and finally the long awaited PivotView Head 2317-21 ($699). Of course the heads are interchangeable so if you start with the base model you can always get the Pivot Head later.

The Milwaukee M-Spector FLEX camera specs are pretty similar to previous “AV” version, 3.5” screen, 640×480 camera, all the camera heads are shorter with a 12.5mm diameter for better capabilities, controls are very intuitive with trigger to take pictures or starts video. On the new FLEX camera version there are some nice improvements you can turn on/off audio recording very easily and the light is much much brighter at 153 lumens (both Ridgid and Dewalt handheld cameras are under 10 lumens) which provides better visibility. The other big change is the screen is detachable so you can set it in a clear line of sight and maneuver at will, very similar to the Dewalt model. We found the connection was pretty clear for the most part but we found got a bit finicky in a couple scenarios, possibly because it was around a lot of other electronics (but that’s just a guess). It says 15’ range we would recommend not going more than 5’ if you can help it, which is a very similar performance we found to the Dewalt model. 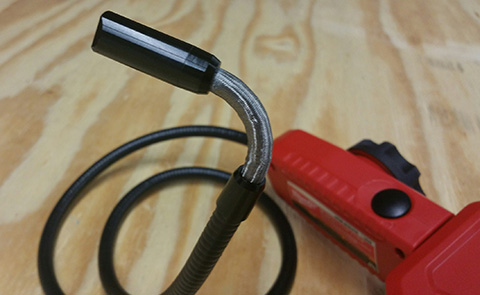 There is definitely a building feud in plumbing tools between Milwaukee and Ridgid, only a short couple years ago they had almost no overlap in tools. With Milwaukee now getting into Pipe Wrenches, Cordless Drain Snakes, inspection cameras, PEX & Press Tools and other areas they are encroaching pretty far onto traditional Ridgid Turf. Where will the Milwaukee M-Spector camera go next, who is to say exactly but Ridgid SeeSnake CA-300 ($420) has been extremely successful because it offers professional plumbers the option to take the handheld camera and add much longer camera reels in 30’, 65’, 85’ and 100’ to cover a very wide range of applications. If Milwaukee was really going to get serious about going after the inspection camera market we would not be surprised to see them follow that same path.