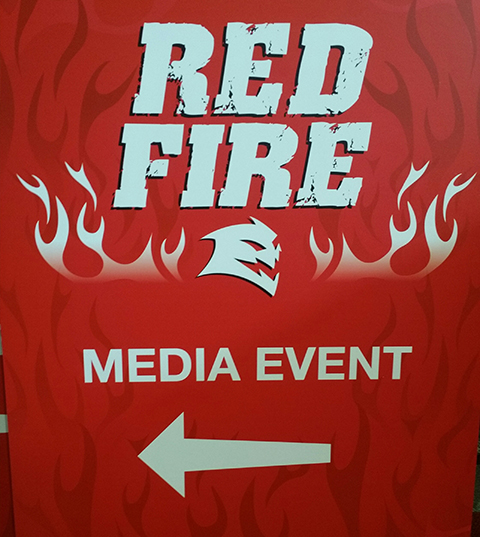 Each year Freud Diablo launches and/or updates several of their main products for a media event just before the STAFDA tradeshow. This year the event was named the Red Fire Media Event although it was a bit confusing because we were expecting to see some new product named Red Fire. Not the case. We did get to see some cool stuff including updates to their carbide recip blades, new carbide hole saws (coming soon), a carbide pruning blade, new Cerment II metal circular blades and finally the Track Point technology added to the Demo Demon Blades with some additional improvements. 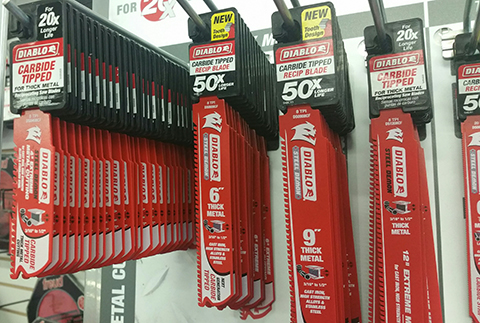 Recently Diablo updated their Carbide Blades for Metal Cutting, the part numbers remain the same and it’s a rolling change for the updated engineering. It looks like the more common 6” & 9” blades have already been updated with the 4” & 12” soon to follow. The branding on the packaging changed very slightly from 20x to 50x but other than that it’s not a going to be very obvious. DS0408CF 4” ($8), DS0608CF 6” ($11, updated), DS0908CF ($15, updated) & DS1208CF ($20) so new it doesn’t even look like Freud has changed their online artwork yet.

For the demo they cut through several difficult metals from black pipe to Boron Steel Master Lock, a little frightening. We would still not recommend cutting black pipe for new installation but in a confined space removal situation, yes it might be the best option out there. When it comes to metal cutting we already thought these blades were the best recips on the market. If they can improve the speed and blade life more than double what we were already getting, truly a league of their own. 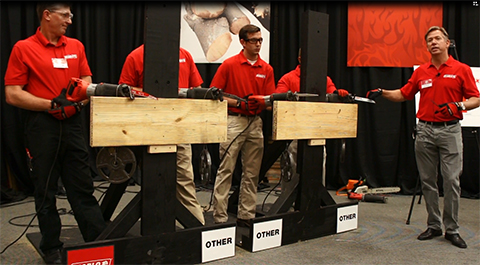 When it comes to the wood demo blades for “nail embedded wood” there is a little more competition Lenox has a carbide offering as well as Milwaukee Ax Carbide which just launched as an Ax 6” ($8), Ax 9” ($11) and Ax 12” ($14) intended to go right up against the Freud Diablos DS0606CWS 6” ($6), DED0906CWS 9” ($10) and DS1206CWS 12” ($12). Of course in the competition cutting through this narly mix of wood, nails, flashing and asphalt two times, the updated Diablo blades completed the task first of course, followed by the Ax carbide about 1.5 cuts in, then the Lenox Carbide which only got 1 cut and finally the Lenox bi-metal which didn’t even get halfway through the first cut. 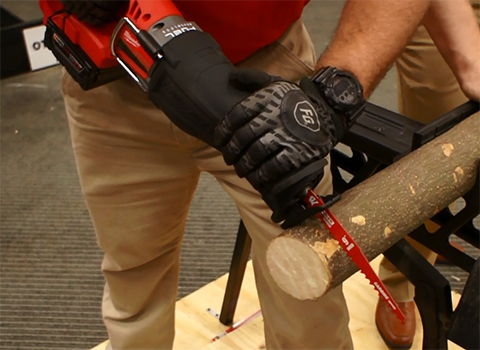 If you are taking time out of your day to read a tool blog it’s safe to say you’ve probably got at least 1 recip pruning blades lying around. Deep flutes and carbide teeth that’ll outlast anything else on the market several times over with very impressive speed. Currently it’s the only one on the market like it, no question we will be using this around the house for our yard work. 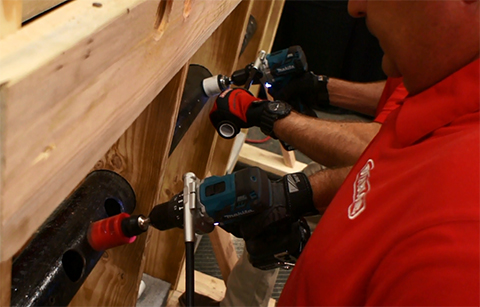 We had the opportunity to see these new carbide hole saws in action and were very impressed. Drilling a hole directly into black pipe with a hole saw is not something we would ever recommend however these new hole saws were able to tackle the job. We have seen carbide hole saws before but none that can handle heavy metal. The Bosch DareDevil Carbide Hole Saws (Diablo’s sister brand) will go through many materials including wood, aluminum and even concrete blocks pretty successfully but that’s as far as it goes. These new carbide hole saws will hit the shelves before the end of the year and gauging the success of the Diablo carbide recip blades we think these will become very popular. If they are smart, Lenox (now owned by B&D) and Milwaukee better be working on something similar to compete.

Based on the abilities of this product hopefully Freud’s next launch will be a carbide shallow sheet metal hole saw that can actually replace the knockout tools for drilling into electrical boxes. Traditional bi-metal hole saws have always been slow, sloppy and easily dulled in those applications but from what we’ve seen here could be a great solution at a reasonable price. 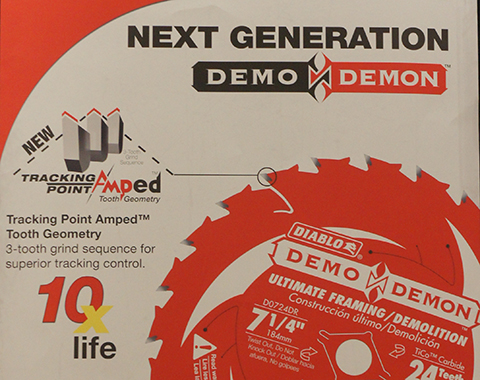 Last year the Track Point technology was introduced on the standard Diablo 7-1/4 Framing Blades ($10) which we actually thought it made it out perform the Diablo 7-1/4 Demo Demon Blades ($15). The Demo Demon blades are getting an upgrade with the Track Point technology which has been improved even further. Instead of the left and right points being all the way on the edge these points are moved in slightly with a grind on each side. This extra step makes the tooth point stronger and longer lasting ideal for the difficult demo applications these blades are built for. 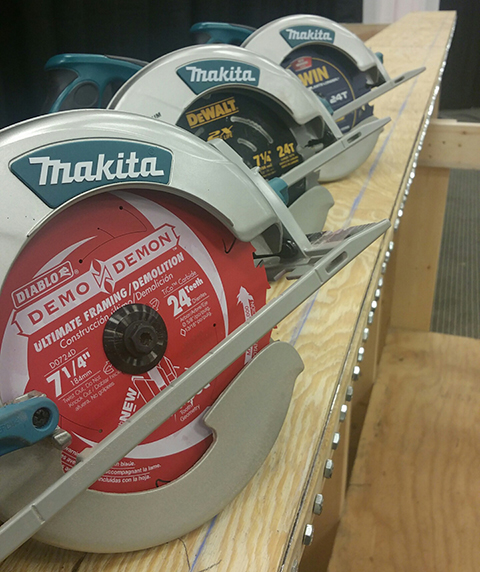 When compared to similar prices Irwin Marathon and Dewalt circular saw blades both designed for demo applications as well the new Diablo Demo Demon was able to last more than double the Dewalt and quadruple the Irwin. 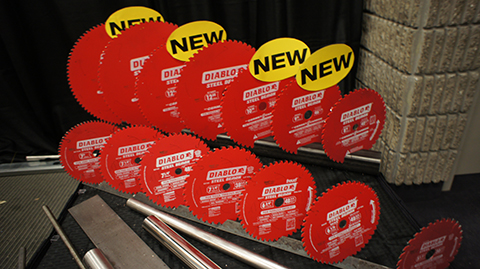 The success of the Diablo Steel Demon Cerment II blades has been building since its update over a year ago. In practice these blades work very well for all types of cutting including stainless steel and have a surprisingly long life. At only $120 for a full size 14” D1472CF the value is pretty exceptional even for those doing a lot of stainless these have become the preferred choice. For the latest update they have simply expanded the line for more sizes and configurations. For 12” and 14” higher tooth counts are designed for thinner metals. A 10″ blade was added for smaller chop saws and the 9″ was added to fit the MK Morse Metal Devil Saw which make both 7″ & 9″ handhelds as well as one of our favorite 14″ chop saw CMS14MB ($489) options.