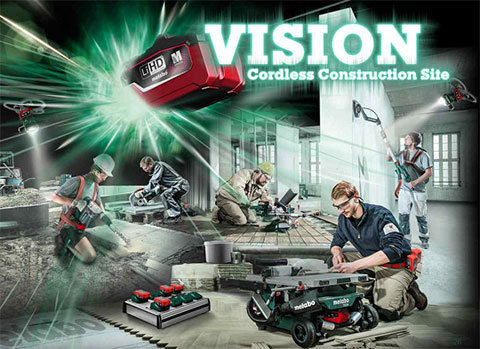 At the recent Metabo press event (in Europe) the new LiHD battery technology was launched which promises 67% more output with 87% runtime over their already cutting edge 5.2Ah battery technology (read our full blog post). With the new technology the promise to expand to larger tools such as a 9” cordless grinder coming within 6 months as a 36V (with a 18V x2 adaptor coming as well). Additionally later 2016 & beyond new cordless tools such as SDS-Max rotary hammer, cordless table saws, backpack vacuum and other larger tools should be arriving. When we saw the picture above however the most surprising glimpse into the “tools of the future” was Drone Work Lights.

A few months ago we saw the video for the Lily Drone that can actually follows you while you are active, whether it be snowboarding, wakeboarding or whatever. It’ll have about a 20 minutes runtime, is waterproof and you can control from your wrist as well. We spoke with the folks at Metabo and they are actually pretty serious that we will see a drone similar to this concept within the next couple years. They already make a regular quad-copter (see below) so it’s not hard to imagine a drone with a mounted LED work light that will follow you around running off their new LiHD batteries (actually all of their 18v). Presumably the light would stay focused towards your work area (probably a similar wrist control / focal point).

It’s still too early for them to share thoughts on runtime, price or light output but we’ve seen price in these new technologies (LED & drones) fall dramatically while the performance only improves. All the pieces seem there in getting a product like this launched in the next year or two, Metabo’s current 18V worklight has a 1800 lumen output and 7 hour runtime on 5.2Ah battery (non-LiHD). If it did 30, 60 or even 90 minutes of flight time would that be enough for the job site use? Also with the Lily Drone hitting the market at $699 even if that price were to come down dramatically to $500, $400 or even lower (possible with fact that the batteries are external and not included in price). 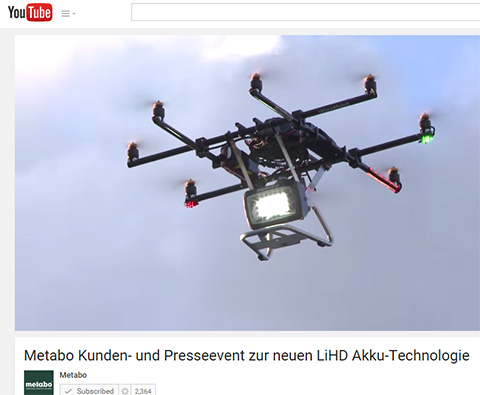 Still the big question, would anybody pay that much for a job site work light? Our thoughts shift towards scenarios where the runtime and pricing might be less of an issue like extreme sports at night (possibly in unison with a Lily Camera Drone) or more serious applications for use by police, military, EMS and other first responders. 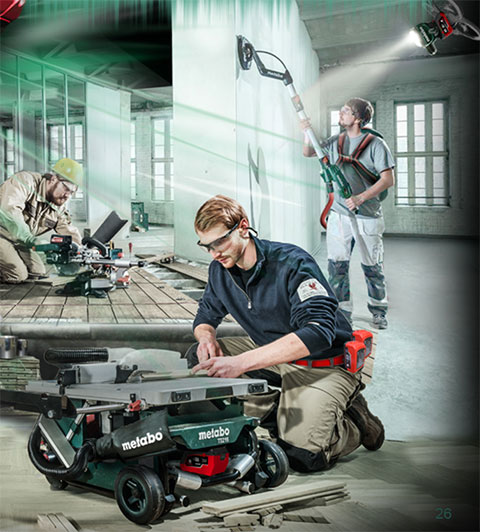 We really like that Metabo along with other power tool brands are actively looking towards the next couple years with the idea that a great majority of corded power tools will be going cordless. Also that we are seeing ideas outside the box to utilize some of these great advances in battery systems. Since tool brands are leading the way in the larger battery packs it’ll be no surprise if we see other products like drones start looking to utilize these readily accessible fuel packs as a way to keep their costs down and ensure their users can stay up on new changing cell technologies 6.0Ah, 6.2Ah, 9.0Ah or whatever is coming in the future.