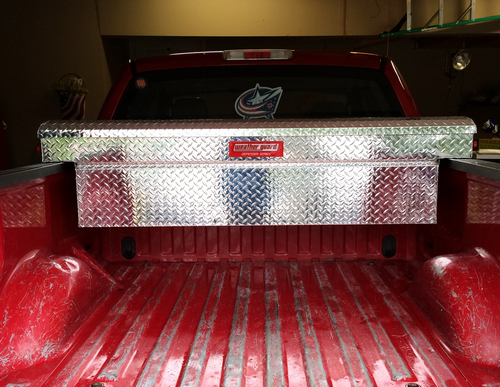 Weather Guard is a well-known name when it comes to tool storage. A quick glance in the back of trucks on the road and on jobsites will show that Weather Guard has a fair share of the field. Their reputation for high quality boxes and storage shows too, anyone that I have talked to about Weather Guard seems to be very impressed with their quality and strength. we recently obtained one of their Defender Series Saddle Truck Boxes ($729), and can say that the quality and look is a solid value.

At first glance, the welds looked pretty tough on the edges, bottom, and hinges. My model is a full-size clear aluminum saddle box to fit in the back of my F150. The Defender series by Weather Guard also offers side boxes, cross, boxes, chests, and underbeds. All are available in clear aluminum or black coated aluminum. The saddle boxes also come in compact, low profile, extra wide, and extra deep options. 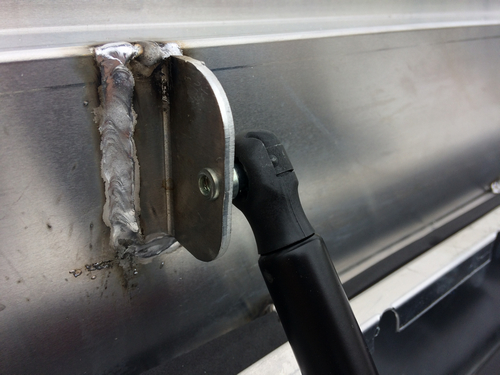 The box came with a set of two keys zip-tied to the bottom, and a mounting kit that consisted of four bolts, clamps, and washers. The only tools I needed were a ratchet with a 5/16” socket and extension, some grease, and a handy piece of 2 X 4 that I used to ensure the spacing from the rails to the box was correct and to hold the clamps up underneath the box while tightening.

Installation was very straight forward, the box just needed centered across the back and then fastened over the bottom lip of the bed rails with the 4 bolts and clamps. I noticed a note at the end of the instructions that read:

“Mounting clamp bolt may be difficult to turn due to the ‘lock nut’ feature. Apply a small amount of grease to bolt threads prior to installation, to ease assembly”

This was no joke, after getting the bolts about a thread down they became extremely tight. I’m not sure if this fastening kit is standard across all Weather Guard boxes, but some grease is definitely recommended.

I was surprised to find that the box was very tight when installing on my F150. So much that if it would have been maybe a half- inch wider, I don’t think that I could have fed the bolts through to the inside of the bed rails. In the end, the bolts ended up angled inward towards the center of the bed and actually impacting with the side walls of the box and warping the washers a bit. The bolts provided could have probably been half the length that they were to get the job done. 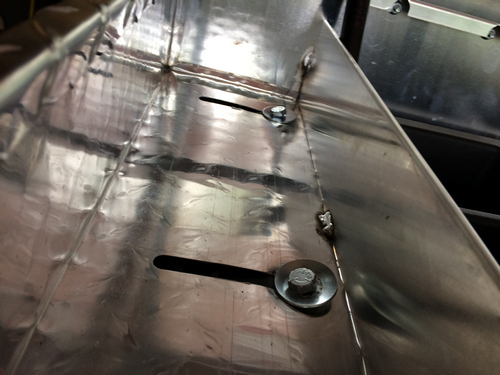 I ended up using the 2 X 4 to hold up the clamps on the bottom side of the rail so that I would have a free hand to hold the box steady while I fastened the (very tough) bolts. Since the bolts and clamps were so tight it took a little while to fasten them all the way down, but with this being said I am also sure that this box isn’t going anywhere with the amount of force it took to tighten them. In the end the box sat straight and flush on the bed rails, and felt very solid despite the bolts being slightly angled inward. 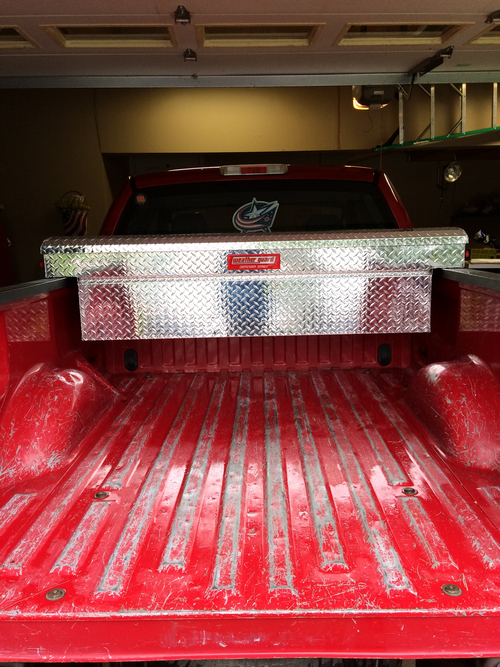 Now for the insides; the box comes equipped with two extruded release buttons on the side that both have locks. It can be locked and unlocked, as well as opened from either side without having to get in the truck bed or reach at all. The buttons remain extruded whether locked or unlocked, which may be a concern if someone wanted to take a hammer and break them off. I have seen other Weather Guard boxes that have release buttons and hatches that are flush with the walls of the box to prevent this, as well as ones that remain depressed when the box is locked, then extruded when unlocked. 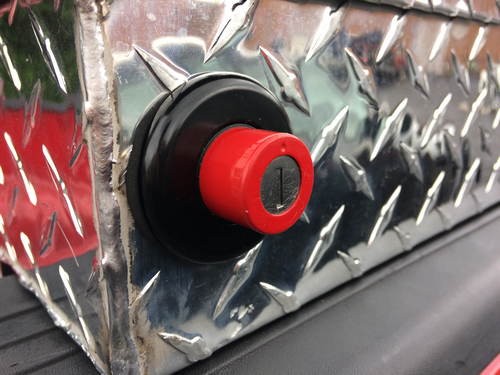 I also noticed when first opening it that there are aluminum partitions that keep tools and things from sliding around and damaging the latch system when stored in the bays that sit atop the rails, on the outermost sides near the buttons. 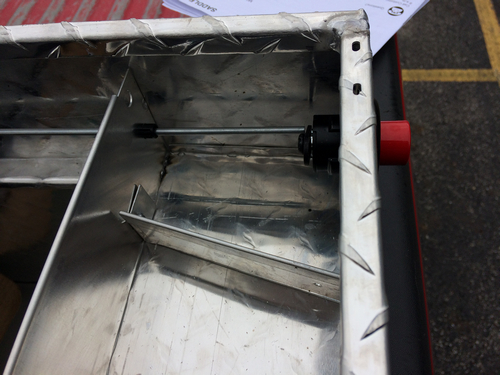 The box opens with ease, thanks to two pistons on each side, and closes just as easily. It was nice to see that both side latches will lock all the way when closed just from one side. Sometimes it took a little extra force to get it to close all the way, but it could usually be shut properly while standing on the outside of the truck without having to walk around and check the other side. The lid felt very secure when shut. 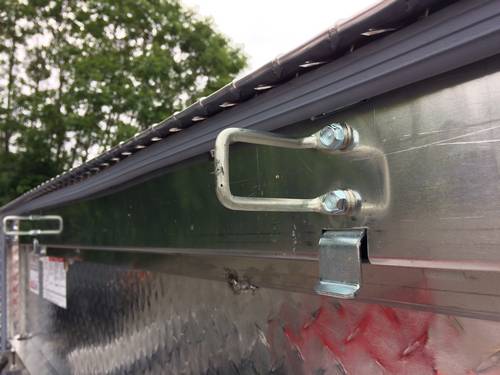 A feature I really liked was the sliding plastic tray in the middle. While not metal, it felt sturdy enough to take a beating, and I’m sure it would remain functional if something decently heavy was dropped on it or knocked it around. It came in handy when installing the box for holding the bolts, sockets, and wrench. There are two small bays in the slider and one large one towards the rear. 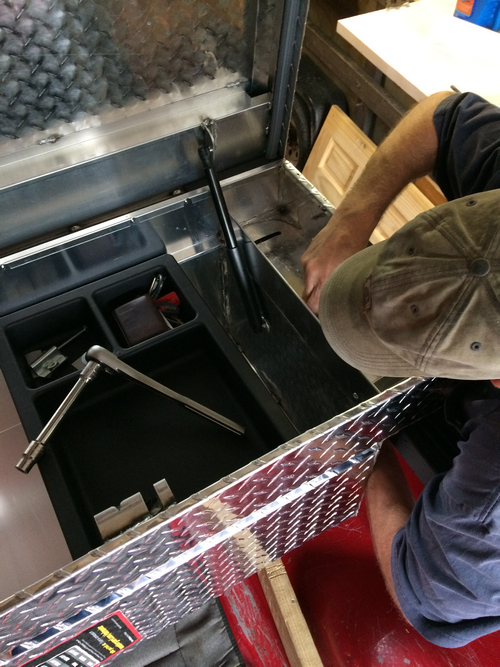 There is also 11.5” of clearance from the bottom of the box to the bed of the truck, making it still able to store plywood, boards and other long materials to a degree. 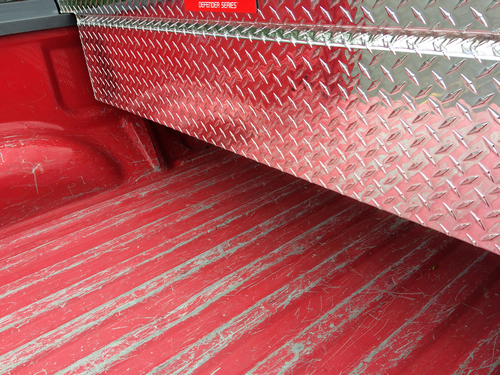 Aside from the difficulty fastening the bolts and clamps on my new Weather Guard Defender box, I really don’t have many complaints, that is until I drove it the first time and noticed a dent in the box in the rear view mirror. Luckily the dent is small, on the back side of the box where it is barely visible, and not near any mechanical components on the inside. When reading reviews of other boxes online prior to my purchase, I was surprised by the amount of complaints regarding boxes arriving with dents already in them, so I was almost certain mine would come with something similar. While its always annoying to receive damaged product, this one probably isn’t worth complaining about. 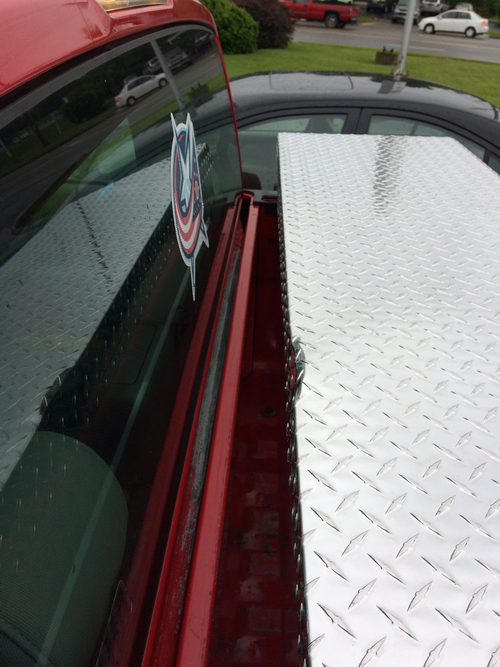 All in all I would recommend a Weather Guard Saddle Box to anyone needing a quality box for a decent price. The shiny aluminum models look great, and I’m sure the black ones look good too. I’m confident this box will hold up for a long time against heavy work and the elements. If you’re looking for a great saddle or side box without breaking the bank, the Weather Guard Defender Series is definitely a good option. 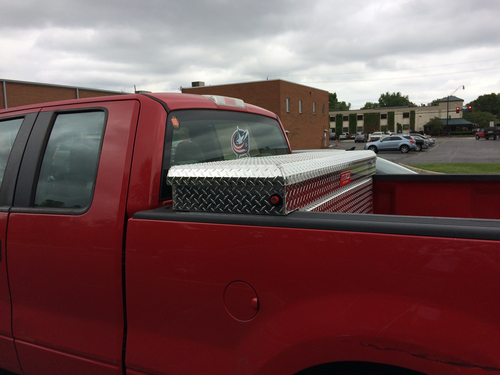