Scott Brown decides if he likes Makita, Zaxe Woodworks makes a few dozen Cribbing Blocks, and Justin adjusts his miter saws down to the thousandth of an inch! All of that and more coming up next!

Hopefully, you’re in the mood for some power tool reviews, because we have a big pile of them this week, starting with the Headless Xavier, who gives us a really good look at the New Gen 2 Milwaukee M18 Fuel 18 gauge brad nailer. Xavier previously reviewed the M18 16 and 18 gauge gen 1s, and goes to great lengths to compare them and point out the improvements found in the Gen 2. This nailer has enjoyed consistently great reviews so far, but this is the most in-depth review we’ve seen yet. If you’re considering the Gen 2 brad nailer, be sure to watch at Tool Craze on youtube.

Our Aussie friends reviewed 7 of DeWALTs cordless, gasless, hoseless range of nailers and staplers. The Duo goes into great detail explaining the pros and cons of the DeWALT flywheel mechanism, complaining only about the wind-up, which they eventually adapt to.  If you’re considering cutting the compressor, you can learn all you need to know from the boys at Oz tool talk on youtube.

Stan the Dirt Monkey continues his mission to make us all better business owners and entrepreneurs with a new series called “Listen while you work”. Each episode he interviews successful business owners in a format that’s just as easy to listen to, as it is enjoyable to watch. This first episode features Derrik, the owner of CMP Attachments in Clear Lake, MN who used hard work and focused leadership to grow his business over 800% in only 6 years! You can watch or listen at Stanley Dirt Monkey Genadek on youtube.

We were introduced to Justin this week, who goes by the humble moniker, building guru. Justin has been posting several tool reviews, focused on precision measurements, making his content really entertaining for true tool nerds. This last week he’s torn apart both the Milwaukee and Metabo HPT cordless miter saws, going to great lengths to tune each one to its greatest possible potential. Then just a couple of days ago, he posted another video walking you through an excellent way to square up your own miter saw. You can see all three videos over at Building guru on youtube.

Alex from Bevelish Creations made a DIY Desk Organizer this week that is just as much a piece of art as it is a functional organizer. This is the first project of his that I found, and as soon as I was done watching this video I went back through the rest of his channel, and they are all as entertaining to watch as this one. If you are looking for a new maker with some inspiring projects go check out Bevelish Creations on YouTube. You won’t be disappointed.

Simon Home in the Earth shared part two of his “marathon effort” to stucco the bedrooms of his earth-sheltered home. Our buddy Jake of All brought this to my attention yesterday, and I now know that I need an Earth Sheltered Home. Simon walked you through how he and his family stuccoed the bedrooms, and some of the struggles they faced along the way. If you too want to live like Frodo Baggins, you can follow along with this project at Simon Home In The Earth on Youtube!

Finally, Gavin Clark made an Industrial Cabinet with all reclaimed materials. Not only does he make a really cool looking storage cabinet complete with Wrench Handles, but he also gives detailed instructions along the way! This guy is awesome. Go check out this project and subscribe to his channel at Gavin Clark on YouTube.

It’s time again for Construction Industry News, brought to you by Construction Junkie. Mass timber buildings have been a hot topic for the last couple of years, especially after Oregon became the first state to approve mass timber buildings up to 18 stories high, which was closely followed by the International Code Council approval of the same height in 2018. If you’re not familiar with mass timber, it’s cross limited timber or CLT, made of stacked solid wood layers glued together with structural adhesives. It’s essentially enormous plywood used as the primary structure for commercial buildings. Riding the mass timber momentum, a construction technology company, Katerra, has recently opened a new state-of-the-art Mass Timber factory in Washington state.  The factory’s 270,000 square feet also make it North America’s largest cross-laminated timber (CLT) factory. Their first job will be to build panels for a 159,000 square foot building in Spokane Washington.

This next video features a lot of big numbers, which I’ll try to put into perspective for you. This is a Liebherr LTM 1500-8.1 mobile crane. It has a maximum load capacity of 600 tons, or… 375,000 12ah flexvolt batteries. It was recently used in Avon, Connecticut to lift 5, 135-foot long support beams, weighing 145,000 pounds each! Which is the same as a little over a half million of these mugs. The amazing thing about this crane is that it’s mobile, and can drive itself to the Jobsite at a staggering 53 miles per hour! To watch this video for yourself, and to get the rest of your construction industry news, head over to construction junkie dot com. 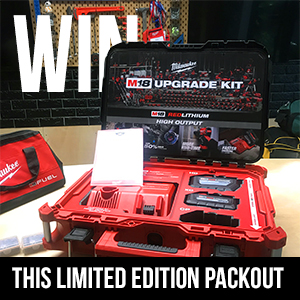