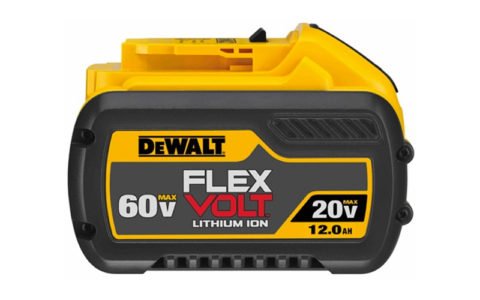 Over the last few weeks we have seen the launch of new battery technology from Metabo and Dewalt which puts new Amp/Hour ratings (used as an 18/20V) at 4.0Ah for slim, 8.0Ah for standard size and 12.0Ah for the large batteries. These launches come only days ahead of Milwaukee’s big 2018 New Product Symposium #NPS18 so we anticipate some news coming from the Red Camp as well. These new batteries are not just a little more runtime however we are seeing real increase of peak watt output!

With the Metabo 8.0Ah & 4.0Ah Batteries they use the latest cells which are slightly larger 21700 (21mm x 70mm) both Samsung and Panasonic are now both manufacturing these larger cells thanks to Tesla essentially making this the new standard size. While only a few years ago with the 18650 (18mm x 65mm) we were seeing around 800 Peak Watt Output on most original 5.0Ah batteries, with these new cells Metabo is reporting around 1600 Peak Watt Output, a incredibly high increase in power and runtime.

The “slim” 4.0Ah are going to be about half the weight and outperform many of the full size 4.0Ah & 5.0Ah most people are using today. For drills, impacts and many other tools we may see these slim batteries become much more popular with professionals.

The new FlexVolt 12.0Ah, will be 4.0Ah when used at the higher “Flex” output of 54V/60V Max and we think we will finally see what these batteries are capable of. Having ll your power and runtime in 1 battery is of course the goal and much simpler to manage. While other brands like Metabo and Makita have done a terrific job of getting similar power with two battery 36V systems this does add more components that need charged and managed. Hopefully their new cordless SDS-MAX 1-7/8” DCH733 (video below) coming later this year will include these 12.0Ah as it’ll be a perfect partner to demonstrate what the future looks like.

Of course FlexVolt can also go the two battery route (for up to 24.0Ah) as we’ve seen from their cordless 12” Miter Saw and this opens up a lot more options. Hopefully by next year’s World of Concrete we’ll see a teaser for a cordless 14” concrete cut-off saw and/or full size demolition breaker hammer. Ideally that works with the 120V adapter for corded use as well but the big challenge here would be explaining to users it’ll be less powerful when using the cord.

We’ve got no doubt moving forward people’s expectations for battery tools will be to clearly outperform corded. The days of corded and gas powered tools really seem limited for many tools, with these higher output batteries and battery backpacks on the rise the momentum is there for some exciting new innovations.

“The market introduction of our LiHD battery pack technology was a major breakthrough in 2015; with our latest battery packs we went a step further”, said Horst W. Garbrecht, Metabo Germany’s CEO. “We wanted to show professional users that they can depend on Metabo for a system that has influenced the development of battery pack technology from the beginning and continues to do so”.

In 2013, Metabo revolutionized the industry with the World’s First 18V 4.0 Ah full size battery pack. This year in May, Metabo is doing it again with the World’s First compact 4.0 Ah. The newly designed battery packs, built on Metabo’s Ultra-M Technology have significantly more performance and capacity compared to the previous generation – at the same size. The 8.0 Ah battery is even better suited for cordless tools with higher power requirements, like small angle grinders, saws, large rotary hammers and the 9” large angle grinder. And the 4.0 Ah compact battery pack is the same size as our initial LiHD 3.1 Ah compact (introduced in 2015) with a compact and lightweight design, perfect for drilling or screw driving applications. The 4.0 Ah slim battery pack is about 2 ¼ pounds less than a double row, full size 4.0 Ah Li-ion battery pack, increasing ease of use and decreasing worker fatigue.

In order to deliver increased runtime and power, Metabo is excited to be the first on the market to introduce the newest 21.700 cells. They are slightly larger than the previous generation of LiHD cells, yet the battery pack size remains the same. This allows for even larger cell capacity while delivering higher currents to the tool, thus allowing true industrial grade performance.

New features of these battery packs include: improved positioning of the fuel gauge, now located at the front, for better visibility.  The battery packs have a rubber bottom to help prevent sliding on surfaces while protecting work surfaces and the case against shocks.  The battery’s upgraded seals help protect the batteries from metal and wood dust, increasing the batteries life.  As always, Metabo batteries are fully compatible with all of Metabo’s past, present and future 18V Ultra-M systems.

The Ultra-M technology was designed specifically for industrial users, whose applications typically demand more power and longer run times.  The key behind the system is a microchip in the battery that effectively communicates with the tool and battery charger.  This ongoing communication ensures that each battery cell is evenly charged and discharged every single time, thus greatly extending the life of the battery as well as protecting the tools being used. Productivity is also greatly increased as a hot “spent” battery can be placed in the charger immediately after disconnecting from the tool.  The charger’s built-in fan system quickly cools the battery pack as it begins the charging cycle, thus reducing overall charging time. The result is a battery that will effectively survive more charge/discharge cycles than other battery systems.  Metabo offers an unconditional 3-year guarantee on their battery and charging system. The warranty applies regardless the number of charging cycles.

To fully utilize the power of this new longer running battery, Metabo features the industry’s largest range of cordless specialty metal tools in the industry.  This includes many unique tools such as several problem-solving grinders, the industry’s only automatic tapping tool, a metal high speed drill as well as a complete line of fabrication and finishing tools.