You saw the title, Portable Bandsaw Blades, and decided that’s an article worth reading, you’re my kind of people. It’s admitably not a topic that’ll keep most people on the edge of their seat but for those who’ve spent 10+ hours straight hanging strut and threaded rod, a faster cutting blade with 1/3 the blade changes may hit close to home. Milwaukee has been the most popular tool brand for portable band saws for decades, offering a full line up; corded Deep Cut 6232-20, M18 FUEL Deep Cut 2729-21, M18 Compact 2629-20 or even the newer M12 Sub-Compact 2429-21XC which is great for threaded rod or rebar. 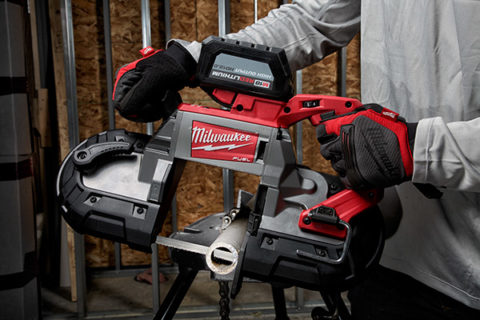 While Milwaukee has been the leaders on the tool side, MK Morse and Lenox have been more popular on the actual replacement blades with standard bi-metal and high performance options like the Lenox Wolf-Band or MK Morse Cobalt 811 band saw blades. Milwaukee hopes to change all that with their new Milwaukee Extreme Metal Blades which fit all sizes of their saws with Thick Metal 8/10 TPI and Thin Metal 12/14 TPI options that will be added to their current standard bi-metal options.

So what’s the big deal about these Extreme Metal Blades, are they really that much better? It looks like they actually are much better than Milwaukee’s current Bi-Metal blades as well as will outperform the premium options from Lenox and MK Morse. For Extreme applications like stainless steel and cast iron actually looking at double the cut speed and three times the blade life. Additionally in the video claim up to 25% more runtime per battery charge with M18 Deep Cut. 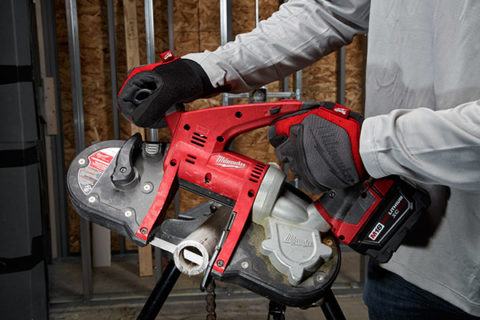 EXTREME TESTING – In the demo video above it is a little unclear what’s going on but we got some additional info on the demo and their marketing claims; Milwaukee’s “Extreme test” is a 2” schedule 80 stainless steel pipe next to a 2” cast iron pipe where both pipes are clamped down and cut in a single pass, not likely to be a cut you’ll ever need to make but certainly a good test for a bandsaw blade. Milwaukee had done this test many times before the event and then dozen more at the event with big audiences so clearly pretty confident. They provided us some of their testing data on how their blades performed against the competition which looked to be the MK Morse Cobalt 811 and the Lenox Wolf-Band 8/12 and the results were very impressive.

In this test both Lenox was only able to complete this cut 7-8 times on average before the blade needed replaced, Milwaukee Extreme Bandsaw Blades 26-28 cuts. Average speed per cut for Milwaukee 35-40 seconds, Lenox Wolf-Band 1:15-1:30 average speed. This is likely how they arrived at their marketing claims of 3x blade life and 2x cut speed vs competiton. Clearly this is not a common application, we’re always a little skeptical from any manufacturer’s own test results and claims of X-time faster, stronger, better, etc. It does seem like they have actually build a well performing bandsaw blade that will outperform the competiton at least in tough applications like stainless steel and cast iron. 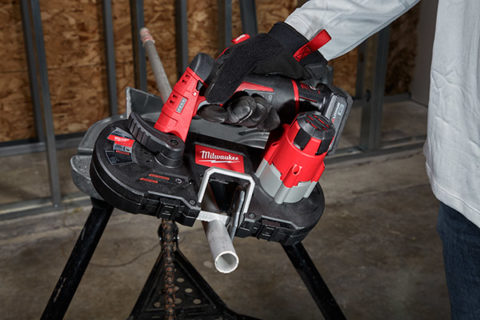