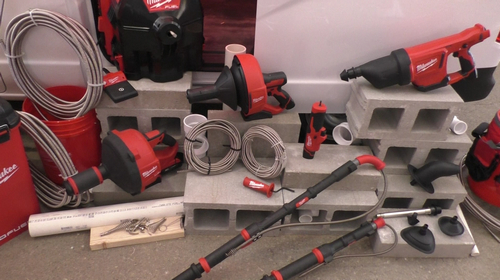 While at the 2017 New Product Symposium this year, we saw some pretty impressive innovations in plumbing tools and technology from Milwaukee. Milwaukee has made some game-changing improvements on some of their existing plumbing tools, but also introduced some industry-first tools that have never been seen before. They have made an impressive step forward for M12 Drain Cleaning & M18 Drain Cleaning. We are very excited to see how these new tools we saw perform against the current competition.

To start, we’ll talk about the M12 Drain Snake 2571-20 ($220 Bare Tool) that we saw hit the shelves earlier this year. We have received some pretty positive reviews of the M12 drain snake, even though some seemed to be a little skeptical that the M12 platform was not powerful enough for this type of application. When taken into consideration though, 18V performance may not always be necessary, and really run-time is the big issue. But with the M12 line of batteries reaching upwards of 6.0 Ah performance, an investment in longer performing batteries can alleviate these problems.

We lent out one of our drain snakes to our friend Tom at SewerQuest, and found that the in-field performance was better than any he’d seen. Some of the great features of the M12 drain snake include the enclosed drum, that keeps the cable out of contact with the user and keeps the work environment clean from any mess or spillage. The enclosed drum also makes it possible to lay the tool down on its side during operation even if it is still spinning without it rolling away. This can also be avoided by setting the tool on its flat bottom surface so that it stands vertical.

An easy to use forward and reverse switch on the handle makes feeding and retracting the cable much easier than other snakes that require pushing and pulling on the front cone to lock and feed the cable. The M12 drain snake weighs in at only 10 pounds, making it the lightest on the market, and much easier to use for longer durations of time over many jobs.

This year, Milwaukee finally introduced us to the much awaited M18 FUEL Drain Snake. This tool marks the first brushless drain snake to hit the market. Milwaukee boasts that this brushless technology will give it 2 times the power over the competition, and much longer run times. This extra power means that it will maintain speed under load, or in other words when you hit the clog. Lower power models can often times bog down as soon as they hit the jam. 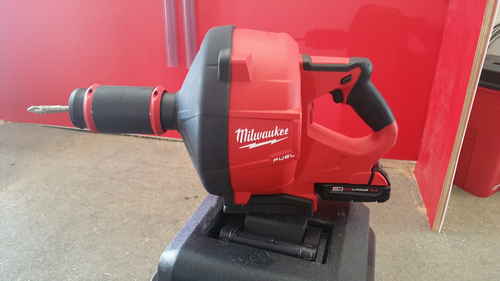 The big sell here is the introduction of the what Milwaukee is calling the CABLE DRIVE Locking Feed System. This feature allows the user to lock the cable feed to the current draw speed and continually feed it without having to manually operate the feed switch. It also has the fully enclosed drum feature that contains the mess inside the tool instead of on the users clothes or clients home. The drum is fully sealed off to keep the mess inside the tool until the job is done when it can be placed in the Milwaukee bucket that comes with it. Unlike the M12 version, the M18 Drain Snake has up to a 50’ cable capacity and also has the option of using interchangeable cutter heads.

We also got a good demo on the M12 TRAPSNAKE system that launched earlier this year as well. The TRAPSNAKE line is composed of two units, the 4’ Urinal Auger 2574-20 ($119 Bare Tool) and the 6’ Toilet Auger 2576-20 ($119 Bare Tool).  This system represents the first powered units designed for clearing porcelain fixtures. The power unit isn’t just a regular Milwaukee drill attached to the top though. The removable unit is optimized specifically for the task of clearing porcelain fixtures and operates at a low speed and torque range to minimize the possibility for damage. The unit, however, can be switched out for use with a traditional manual handle, and the snake can even be purchased as a bare tool with only the manual handle. 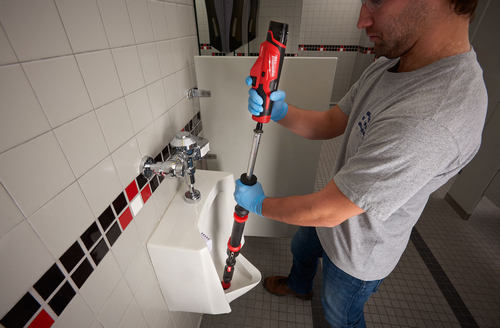 The difference can really be seen in the demonstration that the power unit dramatically increases the speed of operation. The snake also features a locking collar that holds the cable in place to allow for easier cable extension. The one-piece design also ensures that the snake will not come apart when fully extended, so the user does not have to touch or reassemble a dirty unit in the middle of a job. The TRAPSNAKE is designed with a non-marring rubber boot that works very well with porcelain compared to traditional PVC boots and will not break or fall off even after demanding use. The TRAPSNAKE has a removable cable design that allows the user to simply replace the cable after it has regular damage rather than throwing the whole unit away.

One of the more interesting tools we saw in the Milwaukee plumbing showcase was the new M12 AirSnake. The AirSnake is designed to dramatically reduce the time needed to clear clogs in sink drains or toilets by using compressed air instead of a snake. The tool has a variable 0-50 PSI gauge that allows the user to choose precisely the amount of pressure needed for the application and to minimize damage to pipes or fixtures due to over-charging. 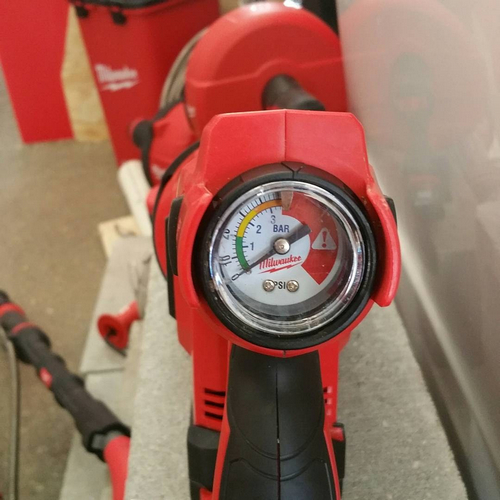 The AirSnake saves time by eliminating the need to disassemble p-traps or other fixtures as well as any set up time for traditional snakes. The AirSnake has the capacity to clear tough clogs up 35’ in 3” pipe, even past a vent stack, which often times is where all the pressure will immediately escape to. The tool comes with 4 different attachments to ensure a snug fit on several different size attachments without any splash back or pressure escape. It will also include a toilet attachment for clearing tough toilet clogs. Another helpful attachment that it comes with is a 45 degree angle piece that will allow the user to use the tool around fixed faucet fixtures that may impede use. The M12 AirSnake will launch later this fall.

Milwaukee then gave us a great overview and demo of their new M18 Short Throw Press Tool that also launched earlier this year. This has been a very good expansion on their existing press tool lineup. The Short Throw Press Tool was designed to provide an optimal solution for residential PEX installation, at a much lower price point than their FORCE LOGIC Press Tools. It is designed around low force applications to provide a better alternative to using slow, hard to use hand tools. The 3 second cycle time is the fastest in the world, and can complete secure connections in a fraction of the time compared to hand tools, with a fraction of the effort involved. 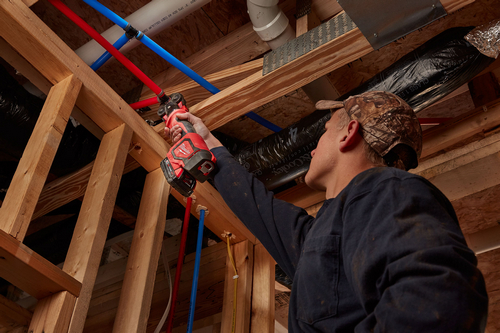 The Short Throw Press Tool can be operated with one hand and is small enough to make connections between studs or in tight applications where hand tools would not be able to make a secure connection. Spring loaded jaws make setting up the connection quick and easy, allowing the user to lock a light grip on the ring and move it into place, prior to making the connection. It can make up to 400 1” connections on a single battery charge and has a pre-press battery check feature that ensures the tool will not die during a connection. This tool is available now in the following kits:

And for the heavy duty jobs, Milwaukee is introducing the M18 Sectional Drum Machine. This machine is the first ever brushless motor in drain cleaning tools. What this means is more power over corded competitors to get through the toughest drain cleaning jobs. Milwaukee’s intention here again is to dramatically reduce set up and clean up times on the job, which they have shown very well with some of the new features here. The M18 Sectional Drum Machine has an electric foot pedal switch that is somewhat standard across drain cleaning units.

One of the main points made in the demonstration was the weight of the tool. Many traditional drum machines are attached to a cart that can be very heavy and difficult to maneuver in/out of a van as well as up and down stairs. The M18 SwitchPAck Drum Machine comes with a removable cable drum, and the power unit has straps that can be used to carry the unit like back pack, making it much easier to move around and also makes set up quick and easy. The inner drum is fully enclosed into the unit so that the mess from the cable stays completely contained within the unit itself, making cleanup time minimal. 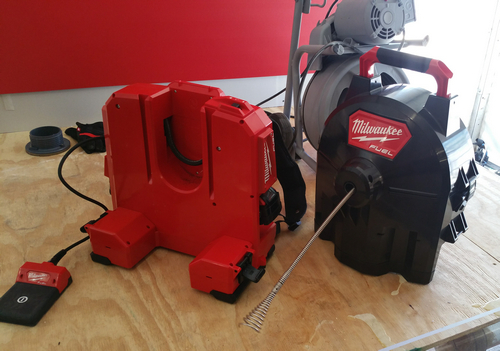 Another innovative feature is the electronic drum brake. In most units, the drum will continue to spin for a short time when the pedal is released. This can become a danger when the cable hits a snag, as it can snap in the drain and get stuck or injure the user. The electronic brake causes the drum to stop almost immediately after the pedal is released, preventing any further damage in the event of a snag. Along with the built in safety features, the enclosed drum and easy set up options can significantly decrease time on the job and leave customers and users happy.

Milwaukee’s recent innovations in the plumbing industry have shown their commitment to making a fully portable line of plumbing tools that address growing plumbing needs everywhere. We were very impressed to see some of the new cordless options they have coming out this year and look forward to seeing how they are received in the field. Stay tuned for more details about upcoming news from Milwaukee and full coverage of the 2017 New Product Symposium!