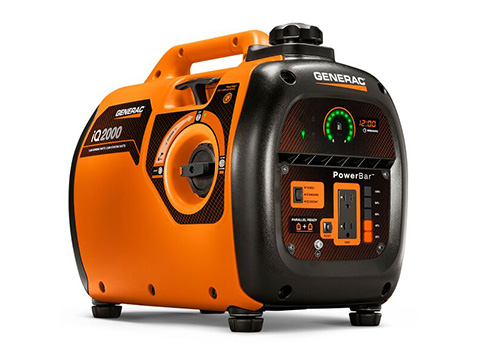 Generac has been hard at work for over 3-5 years testing and perfecting their new iQ Series inverter generators. Of course when you say Inverter Generator everyone is going to think Honda EU2000i or Honda EU3000iS because they have done an excellent job of dominating the market for years with these extremely reliable and amazingly quiet units. The team at Generac is very excited to launch the new Generac iQ2000 ($799) inverter generator because they are confident they’ve created a “Quieter, Smarter, Long-Running” unit that will outperform the Honda and still be $200-$300 less expensive. Bold words which they know will need to be field test for some to become believers.

Quietness can be very important for these small portable generators, nobody wants a tailgate or camp next to a lawnmower. Inverters are inherently quieter than traditional generators which isn’t saying a lot but to be as quiet as (or quieter than) the Hondas is a feat many have tried but so far we have not seen accomplished. From the looks of it Generac has done it.

One feature we really like on the Generac iQ2000 is the “Smarter” digital dashboard which shows fuel level, remaining run-time, wattage use and generator status. This is a huge benefit and way better than a dinky needle gauge. Fuel consumption varies greatly depending on what you’ve got plugged in and with this generator you can easily tell in a glance if you’re going to get roughly 3 hours or 6 hours with your current setup.

The ultra-lightweight design is specifically engineered for easy portability. Select from three engine speeds, depending on the electrical demand, to significantly reduce noise and fuel consumption. Plus, parallel capability means you can combine two generators for nearly double the power – without sacrificing portability.

All too often we see folks buy generators too big for their needs/capabilities. If you are looking to actually backup your homes essentials with a portable generator for power outage you really should consider installing a manual transfer switch to cover sump pumps, furnace fans, kitchen outlets and some creature comfort outlets for lights and electronics. At that point a 7000w, 8000w or even a 10,000w generator might be the ticket and you’ll be covered. 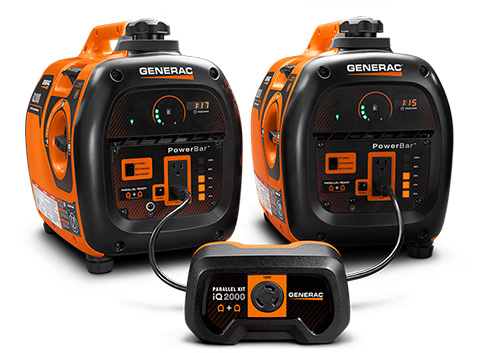 The problem is if you don’t have a manual transfer switch how much can you really use at one time, some things might be hard wired, do you have enough extension cords to run 10 places all over the house, etc. If you just wanted something to power a fridge, tv, some lights, medical devices and charge cell phones a 2000w inverter unit might be the ticket. Two of these units can also be paralleled together for 4000w (3200w) for even more flexibility. Your neighbors will thank you and with the super portability it’ll be there for recreational needs as well.