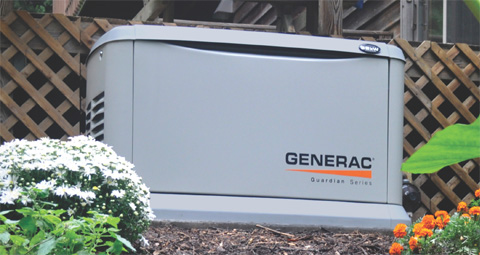 When it comes to standby power for the home Generac is the leader with their Guardian series 8kW-22kW generators. Generac has continued to update this product line and just recently announced a new 22kW unit, configured with the whole house 200 amp smart switch as model 6551 ($4599). In a never-ending battle to improve the performance of their generators Generac has managed to get 22kW out of the same engine displacement, 999cc, as their 20kW 6244 (to be replaced by the 20kW 6729 model soon). The new higher output generator will also get better fuel economy, running at 100% 3.68 gal/hr vs 3.85 gal/hr or .167 gal/kWhr vs .1925 gal/kWhr. When you are talking about powering a whole house for a few days or even weeks this makes a huge difference.

When comparing the new Generac vs the similar 20kW models from Kohler and GE (with Briggs & Stratton engine) you will see their 999cc and 993cc, respectively have outputs and fuel consumption right inline with the previous 20kW Generac model. When looking at the 100% LPG numbers for instance the new generac 22kW uses less fuel than Kohler or GE at their 100% levels which are of course only producing 20kW of power. Numbers very when you look at different run rates and when you look at LP vs Natural Gas but in actual usage where consumption will go up and down the story should be very similar. Pricing for the 3 units (all including 200SE whole house switch) looks to be very close with Generac 6551 at $4599, Kohler 20RESAL-SE $4496 and GE 040381 $4599, using the minimum advertised pricing from each manufacturer.

For more information on Generac Standby Generators, home or commercial give the pros at Ohio Power Tool 800-242-4424 a call. Able to ship fully configured units all over the country they can also arrange installation for the central Ohio region; you’ll need to arrange your own installation otherwise. Check out the video below showcasing the Generac factory in Waukesha, Wi where all the standby generators as well as the XG and XP portable generators are all manufactured.