The number one question we’ve gotten about the new Makita 36V (18Vx2) 7-1/4” XSH01X ($429) cordless circular saw is, how does it compare to the Milwaukee M18 FUEL 6-1/2” 2730-22 ($399) circular saw. Both of these saws aim to address the issue that 18V cordless circular saws have just never had the power or runtime to truly replace their corded counterparts. After we finally had both in hand we visited several folks in the field who build concrete forms and have been looking for a better cordless circular saw answer for sometime. These guys needed a powerful cutting solution that would not involve dragging a cord around, easy to maneuver and good runtime so they do not have to run back to the charger every few minutes.

We do understand the Makita XSH01X circular saw is actually a 36V tool which isn’t really technically accurate to compare to other 18V tools. Our friends at A Concord Carpenter did a great “true” 18V Circular Saw Head to Head recently, see video below.

That being said in everyday practical terms and on the jobsite people really just care if the tool works with the batteries they got. The 28V & 36V tool lines have fallen way behind in popularity not because people didn’t like the power but because people don’t want multiple chargers and different batteries for different tools. Makita has made it very simple with a 36V platform that is powered from the same 18V LXT batteries people already owned and that work with all their other drills and tools. The new Makita bare tool saw XSH01B ($219) is right in line with the cost of the M18 FUEL bare tool saw 2730-20 ($199) so for those already invested in a system, the costs aren’t too much different.

One of the biggest issues off the bat which was somewhat surprising but then not really that surprising at all once we thought about it for a second was the blade size. The Makita takes a much more common 7-1/4” blade and the Milwaukee FUEL takes a 6-1/2” blade typically just used on cordless circular saws. It is not the additional 3/8” cut capacity that makes much of a difference. It is more the availability of the saw blades themselves when they need them. Just about every tool trailer in this country has a box of 7-1/4” blades but the 6-1/2” are more of a rare commodity. There are also a lot more choices at the store for a 7-1/4” in brands, tooth count, box quantities, price and specialty blades like Trex blades or Hardie blades which don’t even have 6-1/2” options. When it comes to tools and construction supplies we’ve found the K.I.S.S. method wins almost every time, standard batteries with standard blades means the tool will get used.

Milwaukee FUEL circular saw along with all the other FUEL tools has really amazed us in the leaps made with power and runtime. In almost every other application the FUEL tools have opted to really showcase the higher torque and capacities by doing ¾” impact wrenches, 5” grinder guard or even ½” chuck on M12 FUEL tools. It was really surprising to us that the FUEL circular saw got the smaller 6-1/2” blade, limiting its practical capabilities and been a top complaint for cordless circular saws for years. For us this was the biggest miss for the M18 FUEL lineup, which in the grand scheme of things probably is not that big of a miss.

As hard as the M18 FUEL brushless motor works, the Makita 18Vx2 with its larger 36V motor really blows it away in heavy applications. We were also very surprised that the Makita can actually cut threw stacked 2x4s or a 4×4 clean. Our corded saw we demoed these saws against even left a small edge on the 4×4 which we have to flip and cut again to get clean. Not sure how they were able to get a deeper cut with the same 7-1/4” blade but it worked great. Below is our video of the Makita XSH01 from World of Concrete, zipping through 5 sheets of plywood with ease.

This was the first tool Makita has launched actually designed from the ground up to work with the 18Vx2 platform, and not just an adapted 36V battery slot. This makes a big difference in the tool balance and usability because the Makita does weight in a full 2 lbs heavier, 10.45 vs 8.45 lbs on our shipping scale (weighed with batteries and blade). Of course you should always use a circular saw with the plate flush against a work surface but still the additional weight can play a factor in maneuverability and user fatigue. Both units were lighter than the corded model which was probably in the 11 or 12 lbs neighborhood (which is pretty standard, more for a wormdrive). 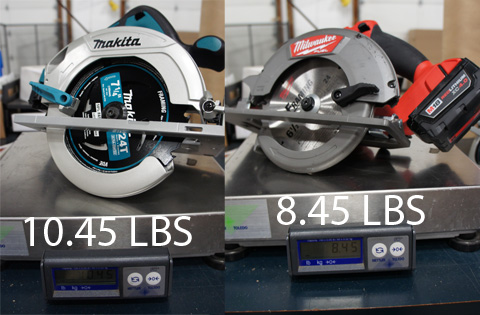 In terms of actual run time, we did not do a true standardized test of these two saws cutting against each other in stacked plywood as our friends from A Concord Carpenter did in their cordless saw test above. These saws were both out on the jobsite being used constantly and the opinion was that they both had excellent run time for cordless saws. The Makita outlasted the Milwaukee but certainly not anywhere close to 2-1 as you would hope with 2 batteries on it. Not only does the Milwaukee have a 4.0 Ah battery vs Makita still using 3.0Ah, the M18 FUEL is of course also using a brushless motor which maximize the run time.

It’s getting harder and harder to compare battery performance; it used to be much more clear cut in the days of Ni-Cd. With lithium ion everything is constantly changing and a lot more variable that will have different importance to everyone. While Makita is still at a 3.0Ar battery we do expect the 4.0Ah to launch sometime in the next two months. Makita attributes the delay in launching the higher amperage technology to an effort of getting the 100% charge time down under 45 minutes vs other brands at 60 minutes plus. The image below was from the UK Makita site so might be slightly different times in US. While they are playing catch up to 4.0 Ah however other brands are already launching 5.0 Ah batteries.

We do imagine both Milwaukee and Makita will be launching their 5.0 Ah batteries soon (probably by the end of this year is our guess). We haven’t got any inside confirmations or anything but based on the simple fact that the battery cell of all these batteries are produced by just a few large cell manufacturers which any good sized manufacturer can buy from. So once the right cells are selected (and there are thousands of options in Lithium Ion) it is to mostly a matter of building a better battery pack to utilize the cell power correctly and of course charge quickly. Smart money says there are already 6.0 Ah battery packs in testing with all these folks.

Once you get into chargers and charge times on a jobsite then you also want to consider multi-bay chargers, which for the 18Vx2 Makita system we would think would be critical. The Milwaukee has a 6-bay charger 48-59-1806 ($99) which charges only 1 battery at a time then moves to the next, while Makita has a 4-bay charger DC18SF ($169) which will charger 2 batteries simultaneously. This would mean the Makita could full charge 4x of the 4.0 Ah BL1840 batteries in less than an hour and half on this charger while the Milwaukee would be more like 4 hours for 4x M18 4.0 Ah batteries. Of course at almost twice the price maybe you’ll opt for 2x of the Milwaukee 6-bay units to use at the same time.

It breaks down to the fact that there are more options now than ever and moving forward it’s only going to get worse. Prices, charge time and runtime will of course all be different for each Ah and it’ll come down to what is important for you. What is not clear at this point is will there be an issue trying to run the Makita unit with one 3.0 Ah and one 4.0 Ah (then what about 5.0 or 6.0 Ah)? Fully charged this shouldn’t be an issue but as they wear it could cause problems as you are no supposed to use the tool if one battery is very low and the other has plenty of charge left.

At the end of the day we were looking at two very nice cordless circular saw options, our feeling is these are the two best options utilizing any 18V battery platforms. For this application and with this group of folks, the Makita Saw was the winner with the longer runtime, more power, standard blade size and for relatively little more money for a 2 battery kit. If your work is a little less demanding, a lighter weight tool is more important and/or you need to make sure 1 battery is always charging you may prefer the Milwaukee FUEL circular saw. If you have any questions on cordless circular saw applications or any questions about Milwaukee or Makita tools give the pros at Ohio Power Tool a call 800-242-4424.