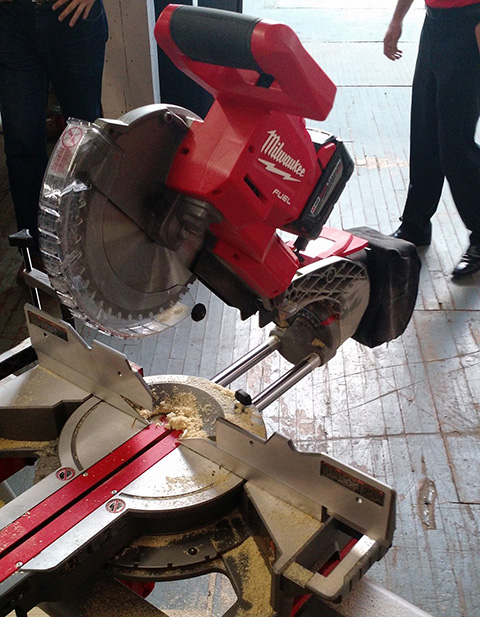 At the recent Milwaukee New Product Symposium 2016 we all got a chance to tryout the new Milwaukee FUEL M18 10” Dual-Bevel Compound Miter Saw 2734-21HD with 9.0Ah battery for the first time. This is the first 10” cordless miter to hit the market and the saw really address many of the power and functionality concerns to replace a corded 10” sliding compound miter saw. The big question is are people ready to go 100% cordless with their Miter Saws?

Up until now cordless miter saws have been more of a niche tool that are handy for certain tasks but with no 10” or 12” cordless miter saws most people would still rely on a corded miter for the heavy lifting. In September Milwaukee will be the first to launch a cordless 10” miter saw 2734-21HD ($649, with 9.0Ah battery) and 2734-20 ($549, bare). With our limited testing it seems to address all the concerns of getting enough power and capacity to fully replace a corded miter saw. The blade spins at 4000 RPM and very impressively shows little to no signs of bogging down when cutting through a good variety of materials. Capacity is very nice as well up to 6” baseboard against the fence, 2×12 lumber using the slide, motor is on side but tucked out of the way, controls are clean and logical and the whole package with 9.0Ah battery comes in under 50lbs.

Runtime with the 9.0Ah battery is very impressive as well 400 cuts in 3-1/2” base trim, 300 cuts in 2×4 pine and 150 cuts in 2×12. Is that enough to get people to swap a corded miter saw for a cordless one? From our conversation with users it is not the runtime of any given battery that is the concern it’s the logistics of having the battery die and needing to have a second battery ready on the charger. Since miter saws are typically taken to the job, setup and then not moved most of the day the hassle with the cords only last a few minutes, very similar to setting up a battery charger.

Sometimes the perception is just as important as the reality, even if the 9.0Ah battery would last all day, potentially multiple days, it’s still a jump to cut the cord completely. With Dewalt launching their 12” FlexVolt cordless 60Vx2 miter saw DHS790T2 ($749) people will have a choice to make in cordless miter saws and the Dewalt cordless miter saw offers an AC cord to plug in when desired or use FlexVolt batteries when the situation calls for it. That is definitely a perceived value which will steer some towards the Dewalt until they become more comfortable with the idea that a miter saw really doesn’t need a cord.

How do the two stack up, Milwaukee FUEL 10” Miter vs Dewalt FlexVolt 12” Miter? Well the first thing you’ll notice is the Dewalt Miter kit costs $100 more, mainly due to needing two 60V FlexVolt batteries to run. Since the Dewalt will require the new FlexVolt batteries there are literally no batteries out there yet that’ll power this saw whereas the Milwaukee M18 will work with millions of batteries currently in the market place. On cut capacity the Dewalt 12” can cut up to 6-3/4” vertically against fence vs Milwaukee at only 6” which is the biggest capacity difference. It can also do 2×14” with the slide vs Milwaukee at 2×12”.

Where the surprise came in was runtime, the Dewalt with two FlexVolt 60V batteries attached could only do 289 cuts in 3-1/4” base trim. Milwaukee with a single M18 HD battery could do 400 cuts in a taller 3-1/2” base trim. These are the numbers reported from each manufacturer and before anyone calls BS it is important to remember Milwaukee launched several weeks before Dewalt, so if anyone was going to change their numbers it would have been Dewalt. As you would expect with the larger capacity saw, the dewalt also weights more, at 56 lbs (not clear anywhere if that’s with or without 2 FlexVolt batteries). 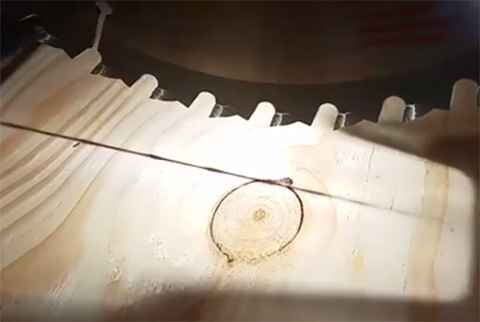 Both of these saws feature the shadow line which very accurately shows where the blade will cut, we really like this feature and hopefully it’ll spell the end for laser lines on all miter saws.

All in all the Milwaukee FUEL Miter Saw really is a great addition to the M18 FUEL Brushless family. It delivers on the power of corded and runtime that should satisfy even the heaviest users. With OSHA fines for cord nicks, fines for extension cord tag being removes, fines for connecting two extension cords and all the other problems we are hearing from jobsites it is no wonder companies are moving toward as many cordless tools as they can.