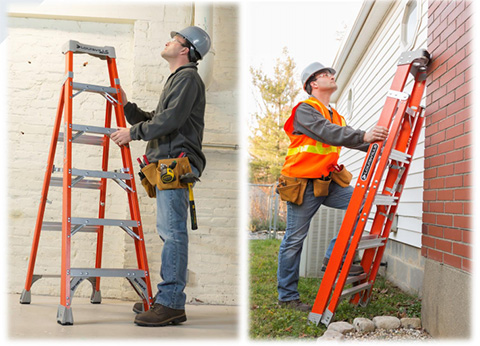 In the world of ladders there have not been too many innovations in the past thousand years, when they were used in scaling castle walls. The step ladder, around at least a couple hundred years, allows for a free standing ladder typically setup perpendicular to the work surface. The platform ladder have become more popular in recent years because of their large standing surface that is inherently safer and more comfortable. The platform ladders however do have some downsides which have led to the Introduction of the Louisville Ladder Cross-Step 2-in-1 FXS1500 which “meets or exceeds OSHA standards” as both a step ladder and a straight ladder, to do more with a single ladder.

While becoming much more popular we are not going to see the platform ladder fully replace the traditional step ladder anytime soon. The downside to a platform ladder is you basically have 1 working height, ok in new commercial construction projects with a consistent task that’ll take hours, days or weeks to complete. These larger jobsites are trying to get rid of all ladders all together and require lifts as much as possible. The platform makes much more sense in these applications with people working at the same heights continuously hanging mechanicals, running electrical, etc these ladders are clearly safer. See video on the new Louisville FXP1800 Series (IAA rated), below which adds some additional features over their FP1500 Series (IA rated).

For those in service trades that might need to reach dozens of different heights in a work day or get into hard to reach places for as little as a few minutes, the larger heavier platform ladders don’t make a lot of sense. The step ladder and/or single leg shelf ladder make more sense to have on top of the van.

What this new ladder does is 2 fold (hence 2-in-1), first it provides a better design for the traditional step ladder that allows you to position the ladder flush with the work surface and work head-on. This is inherently safer for the user and causes less strain and fatigue while using, not quite to the level of the platform ladder but much better than a traditional step ladder.

Second this is the only step ladder (patented) OSHA “approved” (while technically OSHA doesn’t approve any product it has been reviewed and determined to meets or exceeds the standards) to be able to lean against a work surface and be used like a shelf or extension ladder. You may have leaned step ladders against something like this before but the OSHA fine for using a step ladder in that manner can be $1000 or more and goes up from there for repeat offenders. Since the FXS1500 ladders are designed for this type of use there is a very nice non-marring pad on top with a V-groove to safety lean against pretty much any surface, pole, corners or whatever.

These new fiberglass ladders FXS1500 are rated IA for 300 lbs and there is talk of a IIA series rated 375 lbs 2-in-1 ladders planned for release later this year. The FXS1500 come in ladder lengths of 4’, 6’, 8’, 10’ & 12’ and feature all the other popular Louisville features including ProTop (with magnets and tool slots), SHOX impact absorption, Raptor Boots for more stable footing, inside spreader bracing and reinforced double rivet steps. Unlike platform ladders we do think this 2-in-1 design could fully replace the traditional step ladders, at least for many professional users.

If you’ve got questions on the different types of Louisville ladders and work platforms give the pros at Ohio Power Tool 800-242-4424 a call, they will be happy to help you out. If you are in the area stop into their showroom and they would be more than happy to show you the difference in person.