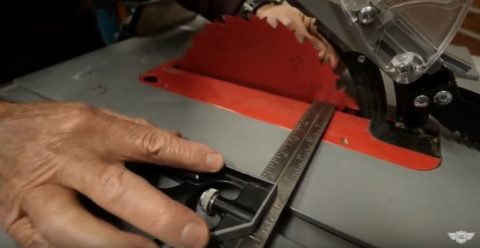 For this competition we wanted to look at the Top 5 Professional Jobsite Table Saws available today and compare them on Safety, Accuracy, Ease of Use, Power and Value. We only selected units with folding wheeled stands integrated, we did not include any of the “Compact” table saw units that use the folding stands also we drew the line at the top 5 for our test, other good options to consider would be Hitachi, Ridgid and Delta which offer solid units at even lower price points. 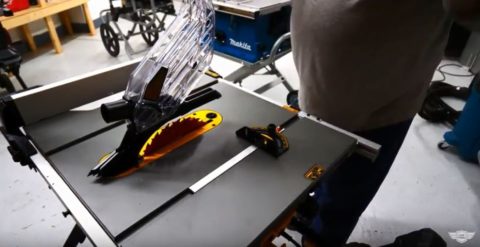 With 5 great competitors in the running some of the rating really comes down to splitting hairs but that’s what we do. Also the big elephant in the room is the SawStop as it’s the only one on the market with “Flesh Detecting” technology. We are really going to look at the saws without putting much emphasis on that feature (No Hot Dogs Were Harmed in the making of this video) there have been dozens of videos & posts on that topic, it is an awesome feature we recommend for everyone but if you are still looking for a table saw we want to focus on the other features.

Safety – We really looked at the mechanical guard systems here, how easy are they to come off and more importantly how likely are they to be stored and go back on later. While many folks will throw those guard in the trash, most large companies in this day in age will require all safety guards to be used when possible. Table saws are tricky because there are some cuts that simple require one or more safety features to be disengaged. SawStop with no surprise was the winner here and not just for its finger saving technology, all other aspects of their guard usage and storage are superior.

Accuracy – These are jobsite saws and often used for just ripping plywood but many also can be used for detailed finish work onsite or by hobbyists. Again we picked the top 5 jobsite saws in the category so “Splitting Hairs” is literally what we are talking about here. While there was no 10/10 we had to ding the Dewalt here the most simply for the play in the fence out of the box (not sure if this is a known issue or one off) but pressing on fence could move it more than 1/32” which is not good for many reasons. Makita and SawStop tied for the lead in this category.

Ease Of Use – Here we looked at intuitiveness of saw, breakdown/setup speed, mobility on stairs/loading/rough terrain, fence, knobs/dials, rulers and any other usability features. Here we really think there is a big advantage as newer saws come on the market. We ranked the Bosch and Makita the lowest which in turn are 2 of the older units. The SawStop and SkilSaw which ranked best are both relative new on the market and you can really tell they reviewed what worked and what didn’t on the other models and most of the features people like you will see on these models. The SawStop offers the best fence and storage for sure. The SkilSaw, being the newest really has the some nice things we like as well, huge wheels which we love, left material support, flip down fence, etc. Very user friendly.

Power – This was a very tight race, all pushing the limits of 15A motor with standard 110v power, make sure to use heavy gauge extension cords on job it can really effect performance on saws like these. With power we could be a lot more scientific-ish but user variations with each rip, we measured rip times for two applications the first was a 31.5” piece of White Oak we did 3 passes each (we did not waste this wood these are going into a co-workers wine barrels). Next we took 5 passes each in 2’x6’ pine really being forceful with the intent to get an average speed as well as to see if we could hit the thermal overload for any.

We were able to hit the thermal overload on the SawStop which we turned off and on and it was working again instantly. Adding more electronics does typically mean these can be more sensitive, other than the overload the SawStop was very fast on cutting speed, probably would have been a tie for winner. The Bosch edged out the SkilSaw here as the winner which was a bit surprising to even us, again super close race here for all 5 saws.

Value – Unlike power which we can test and measure value is completely dependent on the user. How will the saw be used, will it stay in your garage or be going up lots of stairs, do you want a dust port on guard (dewalt includes one) or do you throw the guard away. Here is our value scores without considering the SawStop “Flesh Detecting” technology, simply because if that is an important feature to you there is only 1 option and you probably already made your decision. If that is not important to you the SawStop while offering a lot of premium features is priced out of the game.

While it was a very close between these 5 awesome table saws there were some really smart things about this new saw we liked; storage, portability, fence, worm drive motor and price point. We would still recommend the SawStop as our first choice to anyone looking for a portable table saw but if you’ve ruled out that option just on price point alone than give the SkilSaw a consideration.