Recently we have done a handful of cordless comparison tests in the most popular pro 18V tool categories which Hilti was not originally involved in (we simply were not able to get the tools for testing). Hilti is a professional tool brand, well respected in the industry so we definitely think they should have a seat at the table when comparing professional cordless tools. Finally we got our hands on these 3; Hilti 18V Hammer Drill SFH 18-A, 18V Reciprocating Saw WSR 18-A and 18V SDS-Plus Rotary Hammer TE 4-A18 with 5.2Ah batteries. We ran them through the identical tests as the Bosch, Dewalt, Makita, Metabo and Milwaukee tools only a few weeks earlier. Here is what we found.

The Hilti 3-speed 18V Hammer Drill SFH 18-A does not appear to be a brushless model (no schematics on any Hilti tools) with only 743 in-lbs torque, reported from Hilti, it rates as the lowest torque output of any of the high performance hammer drill in our recent 18V Cordless Hammer Drill Comparison. Price for the rest of the hammer drills also look to be below $300, many with extra deals for the holidays (free batteries, special discounts, etc).

That being said Hilti has launch a new high output 4 speed Drill/Driver SF 10W-A18 ($459) which may be brushless (not reported) and has a torque output of 1,062 in-lbs. Currently there is not a Hammer Drill Counterpart to this tool, perhaps for next year’s test they will have something ready.

Numbers came in pretty close to the Bosch which makes sense as they are both brushed tools with very similar torque ratings. Hilti Hammer Drill with battery was 6.35 lbs. Hilti & Dewalt are only hammer drills in the test with have 3 speeds (rest have 2), so not sure how/if this factors into either of these tests.

The Hilti 18V SDS-Plus TE 4-A18 has also been on the market for longer than some of the other competitors in the recent Cordless SDS-Plus Rotary Hammers Comparison. With Hilti’s manufacturer rating of 1” capacity, impact force of 1.5 Ft-lbs, 0-1090 RPM and 0-5200BPM the power output on this unit looks to be lower-middle of the pack vs other units we tested. 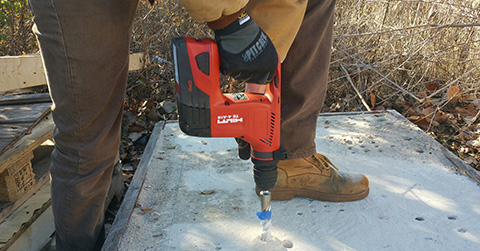 The results for the Hilti TE 4-A18 were pretty interesting we expected it to be a little faster, not sure if there was conditional factors (about 20 degrees colder) but we would say with a smaller margin of error for individual tests & concrete consistency the Hilti, Dewalt & 18V Makita were all very very close in speed performance. Hilti had a similar weight to those models as well at 7.45 lbs and torque rating so it seems logical. The Hilti actually outperformed the rest of the tools in battery life with the ½” bit which seemed odd for just “.2 Ah” more. We look into this further after the testing and their 5.2 Ah battery actually has 112Wh, which is the most “Watt Hours” of any 18V (or 20V Max) battery in the test. Even the Metabo 5.5Ah LiHD (used in test) only has 99 Wh and only the Metabo 6.2Ah LiHD having the same 112Wh. Looking ahead as manufacturers have more control over the “Amp Hour” rating and users putting more emphasis on Ah, we will need to also keep an close eye on “Watt Hours” as well to make sure we are looking apples to apples.

The final 18V cordless Hilti tool we looked at was the most popular cutting solution which we match up to the fellow competitors in the 18V Cordless Reciprocating Saw Comparison. Recip saws are really tough to predict performance because there really are not “power” rating manufacturers can put out there. Even the stroke length and strokes/minute are not too telling because they all seem to be 1-1/8” and 0-3000 strokes/minute.

The results were a little surprising for the Hilti, we thought this saw’s speed test would be at or better than the Dewalt DCS380 with a price well about the only brushless in the competition, Milwaukee FUEL Sawzall 2720-22 ($399). At the time we were unaware of the difference in the 5.2Ah batteries so we thought the speed was just offset with longer runtime. With the battery having 112Wh however it just means the Hilti battery is a bigger fuel tank. Not that this saws performance was bad, as a rule of thumb if any tool rates about the same as similar Metabo and Bosch chances are it’s a pretty good tool. At 8.35 lbs it was the 3rd heavies. This is another example how newer cordless tools are just leapfrogging forward so the newer the tools (brushed or especially brushless) the better it is going to perform. We would not be surprised to see a Hilti 18V Brushless Recip Saw in 2016 but we haven’t heard anything specific.

Just taking a sample look at 3 of the more popular cordless tool categories we’d say the Hilti 18V tools are right in line with the other professional brands in terms of snapshot “performance”. One thing we did learn is that the Hilti 5.2Ah battery is the highest rated “Watt Hour” which means on average the tools are going to run longer than equal cordless tools. Others like Metabo and Milwaukee (in January 16) look to match the 112Wh number with their 6.0Ah batteries but is seems Hilti definitely has the highest Wh in the  5.0-5.5Ah range. The Hilti cordless tools themselves however reminds us a lot of the Bosch cordless with very solid performers but they are not continuously upgrading tool models as we are seeing from Milwaukee and Makita especially, seemingly redoing tools every other year. In today’s world a 3, 4 or 5 year old cordless tool is simply not going to have the top specs as technology advancements are happening faster than ever before.

All that being said, professionals are loyal to the tools that perform for them and talking to many Hilti users are very affectionate to their tools because they are reliable. For most of these tests it would be nearly impossible to feel the difference of a few seconds +/- over a several minute test (we couldn’t tell without looking at the numbers) especially not on your “average” jobs. You will certainly notice a 10-20% more run-time per battery charge and everyone can remember the last time a tool fail in middle of a job. Hilti cordless models don’t change very often and are not going to have the latest, highest performing brushless motors (at least not at the moment) but they do hang their hat on solid reliability which is how they justify their higher price points and when talking to their loyal user base, they have no problem with this

We won’t not be surprised when these Hitli fans don’t believe our number (or even the spec from Hitli themselves) that don’t rate these tools significantly better than the competition. We equally won’t be surprised when fans of Dewalt, Milwaukee, Makita say Hilti is way over priced and don’t even perform as good. Everyone is entitled to their opinion! We did answer a lot of questions amoungst ourselves here at Coptool and we even learned more about the other comparison tests we did looking backwards. Hopefully you’ll take something away for all these various cordless tests… they are definitely a ton of work.