Probably the most anticipated Milwaukee M18 FUEL brushless tool to launch this year was the 2763-22 ($429, Ohio Power Tool) ½” high torque impact wrench with the friction ring. This friction ring model is really geared at the automotive market vs the 2762-22 ($429, Ohio Power Tool) which is pretty much the same but uses the detent pin (sockets cannot fall off 100’ in the air) and is geared more at steel erection and construction. If the Milwaukee ½” impact is going to play in the automotive world it is going to go right up against the reigning champ in that space which is the Ingersoll Rand IQv20 ½” Impact W7150-K2 ($513, Ohio Power Tool). We took the two head to head and this is what we’ve found.

On Paper Comparison Ingersoll vs Milwaukee

On paper you can pretty quickly see some of the differences. One factor not on the chart above is that the new Milwaukee is a brushless motor so you should expect longer runtime per charge and less maintenance down the road. Couple this with their new higher amperage 4.0 Ah battery and you should expect the best possible battery life. We would imagine IR will also launch a 4.0 Ah battery for IQv20 soon, as their new IQv12 tool utilize a 2.0 Ah battery but not sure when this might happen. Unfortunately we did not test the battery life runtime on these tools so we cannot speak to what this might look like. 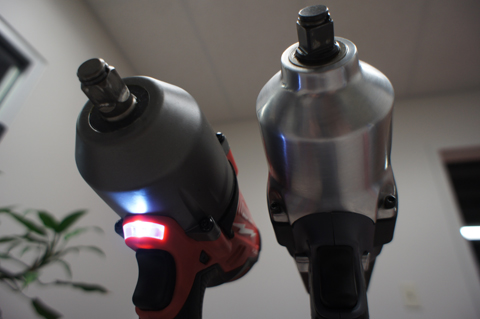 Milwaukee did add some nice features to their tool including a LED light as well as a 2 model switch which gives a low speed/torque option that tops out at only 100 ft lbs. Since both these tool have very nice variable speed triggers it does make some sense this other option would be a very low torque setting. That being said this is a very large heavy tool we would not want to use regularly for these low torque applications, especially if there’s a compact impact wrench handy. 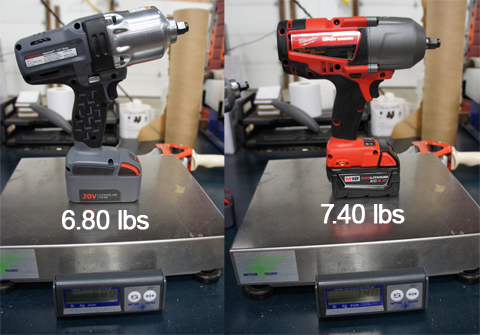 In talking about tool weight certainly both of these tools would be shopping in the husky section. We were somewhat surprised to see the Milwaukee come in a little bulkier and heavier at 7.4 lbs. This is .6 lbs more than the Ingersoll Rand but they are pretty equal in overall length. The IR features a slight tilt in the body, you can see in the picture above, which some guys like and others prefer the strait 90 degree of the Milwaukee but that will come down to personal preference.

Both of these tool platforms do support a wide range of other complimentary tools. The Milwaukee M18 is obviously the much larger platform but for just in the automotive category the IQv features more specific tools like the ½” ratchet kit R3150-K1 ($303, Ohio Power Tool) or if you wanted the W7150 impact with a 2” extended anvil you could go with the W7250-K2 ($504, Ohio Power Tool) basically the same tool. The folks at Milwaukee however have really been leading the way in terms of technology on the brushless front as well as battery technology so it’s a tough call. They have also built the M12 charger into all the new M18 chargers which opens up even more compatibility with items like the M12 Ratchets 3/8” 2457-21 ($149) or ¼” 2456-21 ($159). Just as with the tools themselves there are many positives and negatives to each line and it will again very much come down to personal preference and brand loyalties.

The Big Question is which is More Powerful? 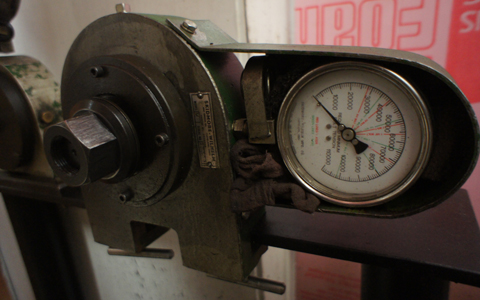 Before we jump right in, here is just a little more info on how we got our numbers. We used the Skidmore, Model M which measures torque in bolt tension. From there numbers you can make conversions using the table below (from skidmore website) with different results depending on bolt size and “factor” multiplier. There is also a small variation each time we do the test based on the tool output because the needle bounces while testing. We are not going to challenge the manufacturer ft lbs results here, we’re not mathematicians nor can we really even explain bolt tension conversion to ft lbs, we basically just wanted to see which one moved the needle father. The Skidmore unit is calibrated regularly and a terrific tool for comparison testing. 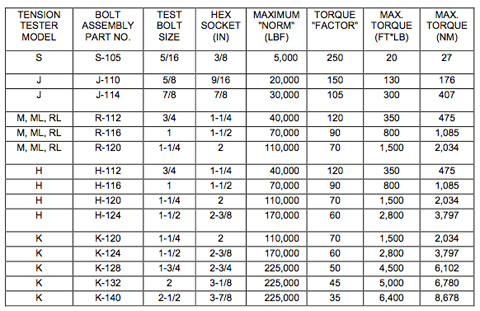 Both tools continuously hit between 35,000 to just over 45,000 bolt tension over several tests. Power output for all intensive field purposes, we would say they are about the same. Even though the IR stats say 780 ft lbs and the Milwaukee says 700 ft lbs we did not see this difference reflected on the Skidmore. Also both have claim nut busting torque of 1100 ft lbs for removing bolts which we couldn’t test as easily however both were very good at releasing the tensioned put on by the other tool. Here is a quick video showing one of those tests on both units.

For questions on any of the Ingersoll Rand Tools or Milwaukee Tools of course the expert staff at Ohio Power Tool, 800-242-4424 should be your first call. These guys are the local area warranty repairs and service center for both these leading brands and they know their stuff. They also sell both product lines at the respective Manufacturer’s Minimum Allowable Advertised Prices so you can buy with confidence.