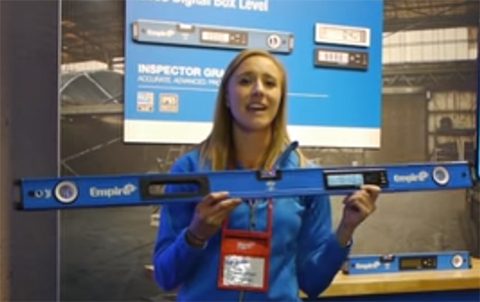 Milwaukee‘s acquisition of Empire is starting to result in changes to their tried and true products.

Empire’s next generation digital box level is the e105. The e105 promises a best in class solution that provides the key features users look for in a digital level. Built on Empire’s mist advanced box level platform, it features dual screens and an audible indicator confirming the desired level position and allowing for sight-free leveling. AN IP65 rating protects the level from dust and water.

The second screen on top of the level is a great feature for people that have to level things that are overhead or in another location that the side of the level can’t be seen. It features auto-calibration, which is a big innovation in the digital space. What that means it when the level is taken out of the box and turned on the level goes through a multi-point inspection mode and then it’s ready to go. The level doesn’t have to be calibrated every time it gets turned on, decreasing downtime. The display has multiple setting for different units of measure (metric or SAE).

The level also features an inspect mode, which allows the user to inspect multiple angles. This allows a user to set a degree value as level, and then move the level to multiple locations to see how far off each location is from the original value. The level also features a “sync mode,” which allows users to select a certain bubble position as level, even if the digital readout doesn’t think it is. When I hear this described I thought it was “sink mode,” because what immediately came to mind was trying to make cabinets level to a sink or countertop that isn’t true level itself. 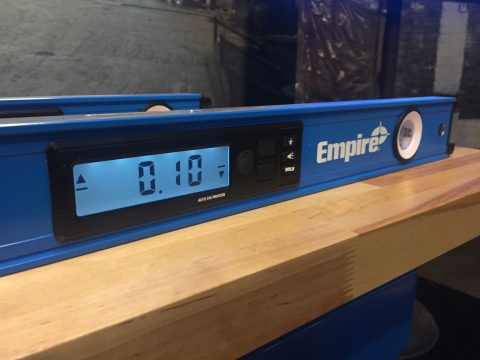 Both screens have a backlight for easy visibility, and the auto-shutoff for battery life can be programmed to different amounts of time up to an hour, so you don’t have to worry about your level turning off in the middle of working. The level itself is dust and water resistant, and ships with a soft carrying case to keep the level perfect when travelling from jobsite to jobsite.

The new Empire e105 level is expected to be available in October of 2016. When it’s available, you’ll be able to find it and any other Empire level at Ohio Power Tool.