Special Thanks to The Jimbo Slice Workshop for this Guest Post, some great info we think many will find useful!!!

For years we have been using bonded cutting wheels for our metal cutting needs, and for years we’ve understood their limitation and danger. A rotation disc at 13,000 rpms that could explode at any minute. Not only can they break up and hurt users and people standing by, they don’t really last that long.

Over the last few years we have seen quite a few alternatives come to the market for metal cutting, not only with grinders but better reciprocating blades, cordless band saws, cordless metal cutting saws. Truth is grinders throw a lot of sparks and can be unpredictable and injure users, but the tool is cost effective and accessories are cheap comparatively.

With so many available diamond edged blades available now, the costs have come down a little bit and more manufactures are getting on board. I tested out five different blades that are widely available and a varied range of pricing. Three of those blades I found to be very similar but one out performed the other. The great thing about these blades is the life you get out of these blades and in terms of the cost you shell out, you will save money over traditional bonded discs.

So lets look at the blades first: 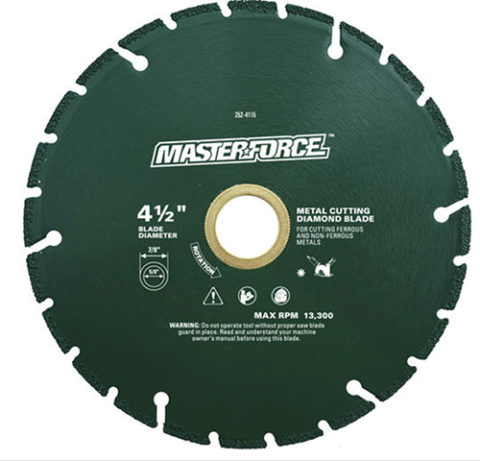 Masterforce Metal Cutting Diamond Blade – $12 @ Menards
Only Available in a 4 1/2″ disc for a very modest price. You will notice it is a segmented style blade that shares design with two other blades we tested. The blade cuts nicely but average compared to the competition. It does cut slower than a traditional bonded discs but throws smaller sparks. This blade claims 65x life than a bonded blade. 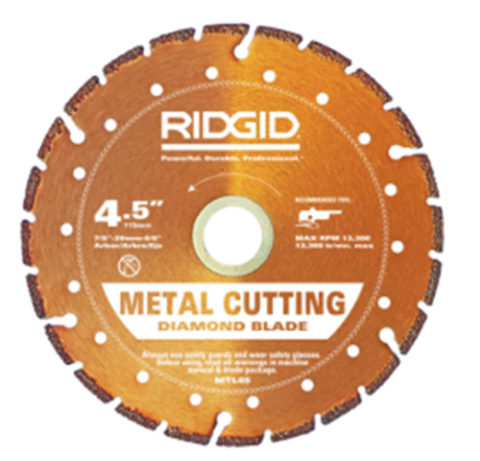 RIDGID Metal Cutting Diamond Blade – $12 @ Home Depot
Strikingly similar in design and performance with the Masterforce, this blade too only is available in 4 1/2″ size. The Ridgid too cuts slower than a bonded wheel but lasts considerably longer at its claimed 70x. The only difference with this blade are the relief holes drilled around the cutting edge. 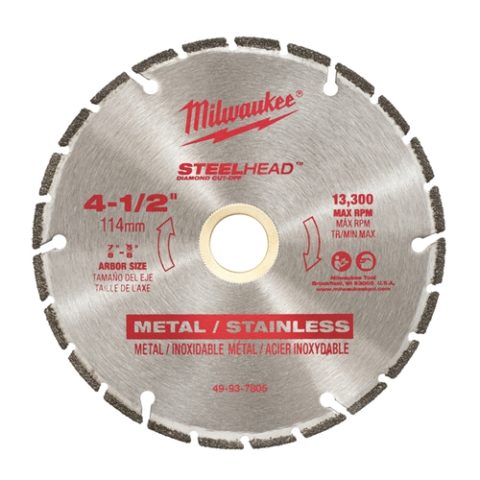 Milwaukee Steelhead – $20-$30 @ Ohio Power Tool Steelheads
The last of this style blade we tested. This is the most aggressive blade we used, throwing larger metal fragments around the shop. It cuts quicker than a traditional bonded wheel and features a good amount of diamond coating over the other competition. The Steelhead is available in a few different sizes, the one tested was a 4 1/2″. 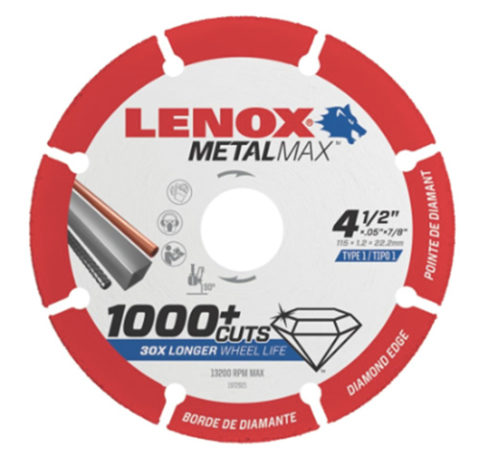 Lenox Metal Max – $15 @ Amazon, Lowes
This is a prime example of competition lowering prices, this blade used to be a 30 dollar blade. The Lenox is the smoothest and quickest blade that we tested. Unlike the Milwaukee’s aggressive grit, this blade achieves quick cuts but does not throw large pieces of metal. The Metal Max has the largest variety of sizes going all the way to 14″ blades. This blade claims 1000 + cuts and a 30x longer life than bonded wheels. 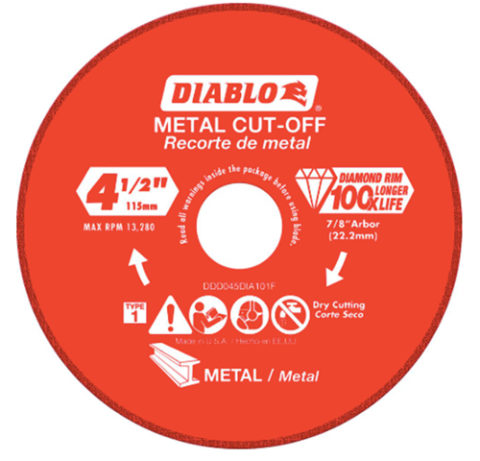 Diablo Diamond Wheel for Metal Cutting – $15 @ Home Depot
This blade had the boldest claim at 100x life over bonded wheels. This contender was the only continuous rim design which I believe hinders its performance. The Diablo generated bad vibrations throughout many cuts as well as the slowest cutting discs in the fight including the bonded wheel. The blade is available in a large variety, over 6″ become a segmented blade.

The Test
For the test I used 7 amp corded angle grinders from Dewalt and Porter Cable. Both grinders spin at 12,000 rpms and share the same motor and and housing designs. The metal that was used in the cut was 100 cuts in 1″ x 1/8″ thick angle iron, (50 cuts followed by the next two material followed by 50 more cuts,) 30 cuts in 3/4″ square tubing and 10 cuts in 1/4″ x 2″ bar stock. Each blade was subjected to continuous cutting until all 140 cuts were achieved.

The Results
After quite a few hours of testing and a large mess on the floor the results are fairly clear. The blades overall performed very similarly but with a few that performed better than the rest. The Lenox Metal Max was the smoothest and quickest cutting. No matter what the material was the blade slid through like a hot knife through butter, throwing an expected amount of sparks. The cuts were clean and quick making it easy on the user for cut after cut. Followed in a close second I rank the Milwaukee Steelhead. This is just a beast for a blade, I loved it maybe more than the Lenox but the grit is extremely aggressive. Many times throughout the cutting I was subjected to large portions of burning metal, no other blade made it rain like the Steelhead. Its design is very similar to the Masterforce and Ridgid but the difference is in the edge. Originally a $50 blade its $20 price is well worth its performance. If you are doing a lot of cutting this is a viable option for you. Middle of the pack performers were the Ridgid and Masterforce blades. Being very similar design they performed rather equally. Minimal vibration was felt though the user but the speed was not the quickest. Going through the thicker bar stock the blades slowed their cut. With the less aggressive grit they did not throw the sparks like the Milwaukee did. Following at the rear is the most disappointing of all, the Diablo. I had higher hopes for this blade but its lack of segmentation led it to slower cuts. The worst of all was the issue my blade had through the first 50 cuts. There was a bad vibration in the blade that almost made it feel slightly warped when the edge would heat up. Once the coat wore down the blade smoothed out a good amount but the speed still lacked. For the money the Ridgid/Masterforce is a better option of the casual user. 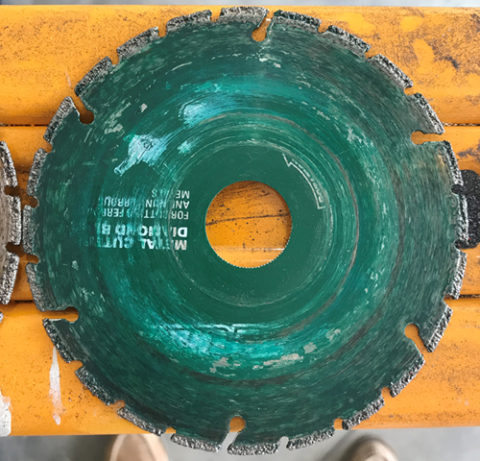 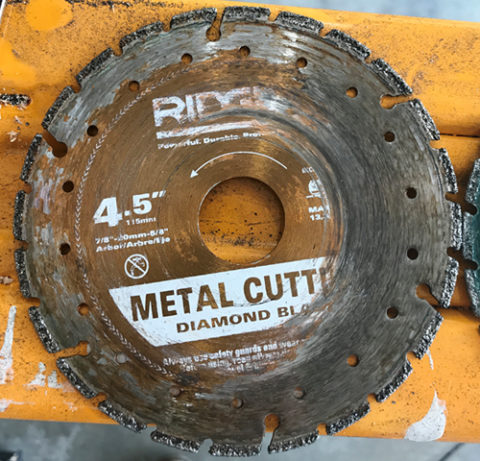 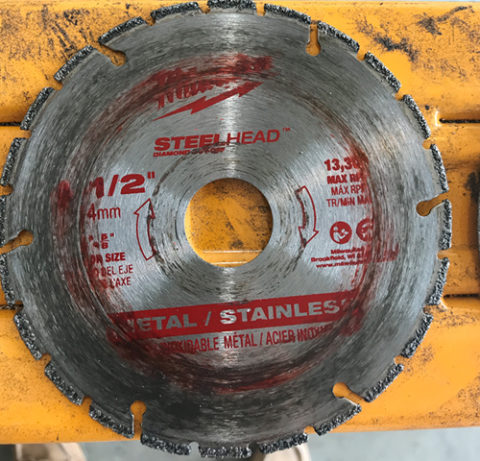 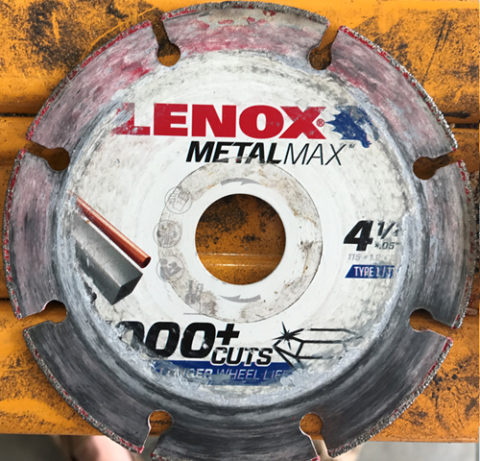 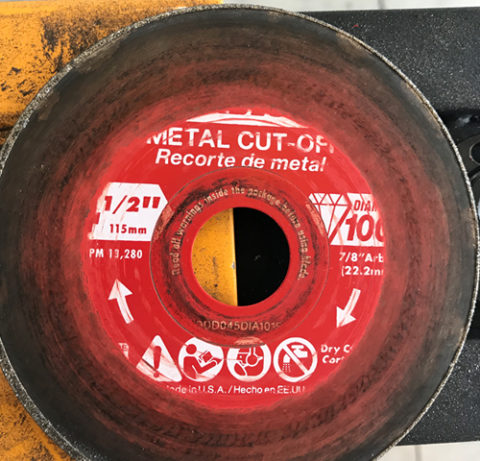 Overall the blades all performed in terms of life very well with plenty of life left in them. Its great to see the premium of these blades come down as it makes this technology more available and creates safer work environments. Grinders are a lot of fun but a very dangerous tool and safety starts with the user itself. These discs are a bit of an investment but the price of 5 bonded wheels it pays for itself. For comparison I started the fight off with a Pferd bonded cut off wheel, after 15 cuts the discs lots around 1/2″ of material. I am confident that ALL of these blades including the Diablo will cut at least 150 more cuts if not more than that. This test was a lot of fun but most importantly I learned about these blades throughout the process and from this point forward, bonded cutting wheels will not be in my tool box, stay safe and throw some sparks my friends.

Special Thanks to Jimbo Slice Workshop for this Guest Post!!! 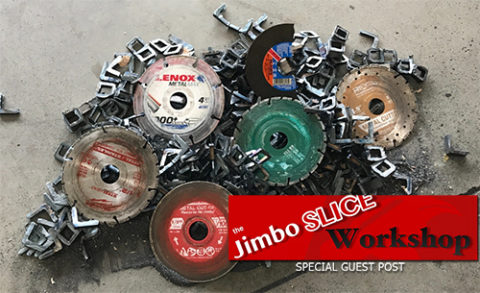