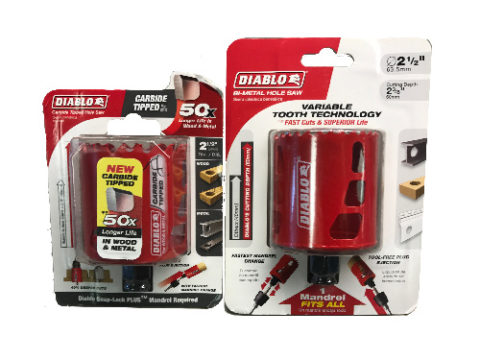 We’ve seen the market shift over the years from bi-metal to carbide blades, first with circular saws, then pretty recently with recip blades and now transitioning into the hole saw category. The new Diablo Carbide Hole Saws brings long life expectancy and faster cutting through wood and metal. Unlike other carbide hole saws we have seen just for wood which could also handle plastic and perhaps aluminum, these new Diablos can handle actual steel. We have been extremely impressed with the performance of Diablo Carbide Recip Blades in wood & metal and these new Diablo hole saws are very similar.

If you’re not familiar with why “carbide” is better than bi-metal, it is short for Tungsten Carbide; it is a chemical compound which contains equal parts of tungsten and carbon atoms. Its basic form is a grey powder, and it can be pressed and formed into unlimited shapes. Carbide is much denser than both steel and titanium. Its finished product can be polished and finished with harder abrasives such as diamonds. It’s a versatile and durable material, making it a great replacement for traditional bi-metal blades!

There are many advantages and reasons why professionals have switched from bi-metal to the carbide blade technology. Carbide can withstand very high temperatures, generally produce a better finish when cutting, resist abrasion better and provide a cleaner and smoother cut. While drill bit “chattering” common and a reason for bit failure, carbide tipped tools generally do not allow this to occur.

The only issue is of course it is more expensive to attach the carbide tooth to the blade, Freud Diablo is on the leading edge of the technology not only on how to make the carbide teeth like we see with the Track Point Blades or Cement II Metal Blades but also how to attach to different stuff like recips and hole saws. The life is much longer so the value is already in favor of carbide but they also continue to make them better and less expensive. It is not a question of if these items will eventually become exclusively carbide (as we’ve already seen in circular saw blades) but more of a question of when.

Whether your goal is to take on a harder material, improve performance, or increase accessory life, carbide-tipped blades are an investment worth considering. While the upfront product cost may be higher than other hole saw types, the benefits will pay off with continued use as long as you don’t misplace them first.