Are you wearing the right safety gloves for your job? Do you know what the ANSI/EN cut level rating mean or which you should be used? If not, hopefully this information will help explain and simplify so you can make the right decision for your application. There are three types of cuts that cut resistant safety gloves are engineered to protect against:

Abrasive cuts
Very common and many industries. A common example of an abrasive cut is the constant rubbing motion of a glove when handing components with a sharp edge (i.e. – metal stamping).

Slicing cuts (Laceration & Incision)
These are characterized by the “slipping” motion of a very sharp edge. The food-handling industry is exposed to much of this type of threat. Also any other industry where workers are using sharp knives.

Impact cuts (Contusion)
While impact cutting is less common in the workplace than abrasive and slicing cutting, but this type of cut delivers a greater force. As an example of this type of cutting accident would be getting struck by a falling piece of glass or sheet metal. On a smaller scale, impact cuts can happen in the thumb area during the normal course of handling sheet metal or other sharp-edged materials. 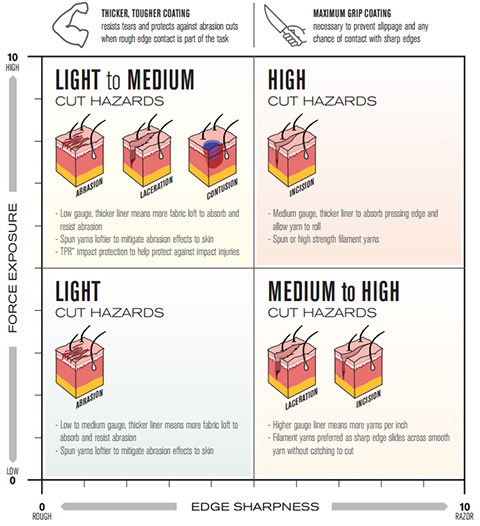 Last year, ANSI (American National Standards Institute) released a new edition known as the ANSI/ISEA 105 standard (2016 edition). The standard provides new classification levels, which includes a new scale in determining cut scores.  In the previous ANSI standard, there were 5 cut scores, now they increased the cut score levels to 9. Each of the nine cut score levels are determined by the amount of force the glove can withstand. For example, ANSI Level 1 gloves are classified for protecting from lighter weight forces, ranging between 200-499 grams of force (for smaller assembly parts with sharp edges, packaging, warehouse and general purpose). ANSI Level 9 gloves are classified by preventing heavier forces by protecting from at least 6000 grams of force. The below chart compares the new and previous ANSI Standards. Level 1-3 remain the same as before, the new standard focuses on better defining level 4+.

While cut resistant gloves in the U.S., primarily follow the new ANSI rating system, it is important to note that the European standard is commonly used as well. The EN388 (European Standard) classifies their ratings similar ANSI, but instead measuring in grams, they measure amount of force in newtons. They have six clarifications compared to ANSI’s nine. The below symbols represent both ANSI and the EN388 ratings. 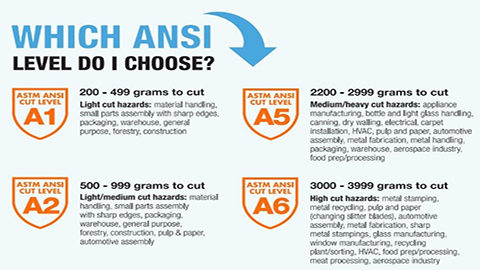 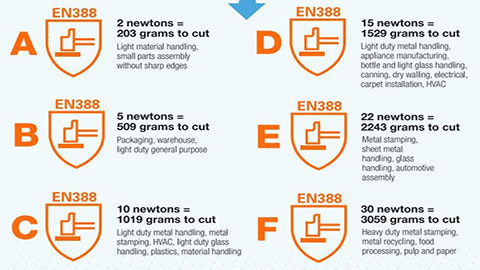 Fortunately, most manufacturers print the ANSI and/or EN rating right on the gloves. Both PIP (ATG, G-Tec, MaxiFlex) & Ergodyne either print directly on the glove back or inside the tag (as shown below). You may notice a symbol containing the letter “A”, followed by a number such as “A3”. The “A” represents “ANSI” for the new rating, the “3” corresponds to the cut rating. EN388 differentiating by letters instead of numbers like ANSI’s rating system, they are classified A – F. 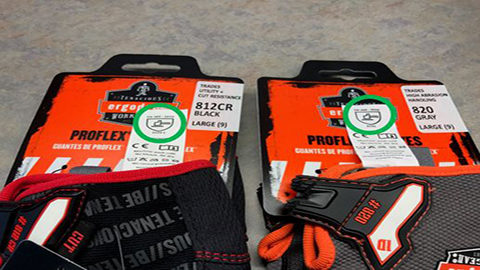 On the EN388 standard there are also 4 numbers below, which appear like “4422”. This rating classifies the gloves performance properties in various applications not just cut protection. Each glove will display four numbers that classifies the gloves performance rating in each area; “Abrasion rating”, followed by “cut rating”, “tear rating” and “puncture rating”. Abrasion, tear and puncture ratings follow a 0-4 scale; 0 = zero protection, 4 = maximum protection. The cut rating system follows a 0-5 scale similar to the old ANSI standard. These ratings can be very useful for different applications where gloves may be designed specifically to work in that environments, an extreme example might be dealing with needles, you would be very concerned about puncture but might have a lower requirement for abrasion protection. 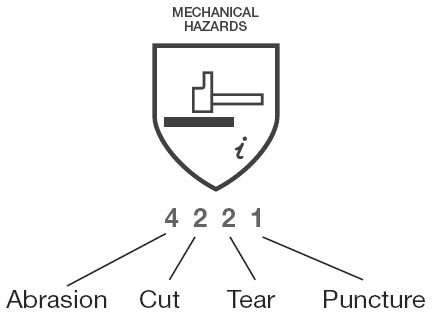