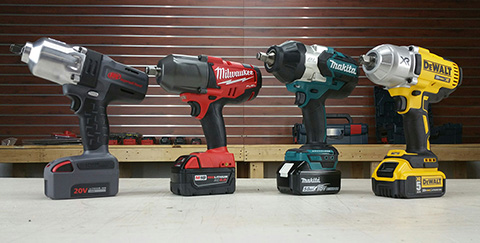 As we continue to work our way through comparing all the top cordless tools (previous posts Hammer Drills, Grinders, SDS-Plus Hammers & Recip Saws) the next logical step for us was Cordless High Torque Impact Wrenches.

Taking a look at the 4 most popular models we have the 20V Ingersoll Rand IQv W7150-K22 ($459, 5.0Ah), M18 Milwaukee FUEL 2763-22 ($439, 5.0Ah), 20V Dewalt Brushless DCF899P2 ($429, 5.0Ah w/detent pin) and 18V Makita Brushless XWT08Z ($239, bare). Hopefully everyone understands at this point, 18V “nominal” & 20V “max” are the exactly the same thing, so we are comparing apple to apple. We will also compare these top cordless ½” impact wrenches with 3 of the most popular ½” pneumatic impacts (previous post) we ran on the same Skidmore torque tester a few weeks ago. Looking at all 7 models together we will hopefully be able to get some definitive answers on the Cordless Impact Wrench vs Air Impact Wrench debate.

The 20V Ingersoll W7150 impact wrench has been on the market the longest but remains one of the most popular the kits have been updated, going from 3.0Ah to 5.0Ah (kits go from ending –K2 to –K22) which provides much more runtime. While providing ample torque for most applications the IQv impacts do not have all the bells and whistles being a single speed, no LED lighting or brushed motor. No-Load Manufacturer Stats: 780 ft-lbs, 2300 BPM, 1900 RPM, 6.85 lbs (w/battery).

The 20V Dewalt Brushless Impact Wrenches launched late 2015, while we received the version with the detent pin for test (other 3 use the friction ring) both Dewalt’s ½” impact wrenches share the same stats, DCF899HP2 ($449, friction ring). The Dewalt unit has several nice features including the LED light from the bottom which is much more useful, offers 3 speeds for better control over fastening pressure and also ran the longest in our no-load life testing. No-Load Stats (in high): 700 ft-lbs, 2400 BPM, 1900 RPM, 7.15 lbs (w/battery).

The Makita 18V Brushless Impact Wrench XWT08Z is the latest brushless to hit the market and in-fact we have not even yet seen a kit with batteries and charger (coming later this month). The good news for Makita fans is this New Kid on the Block was rated the most powerful in our testing at 42,000 bolt tension in forward or about 650 ft lbs. This is nearly equal performance we tested for the most powerful air impact wrench 2235TiMax ($279) and more powerful than the other top air impacts. No-Load Stats (in high): 740 ft-lbs, 2200 BPM, 1800 RPM, 7.90 lbs (w/battery).

SO WHO HAS THE MOST POWERFUL CORDLESS ½” IMPACT WRENCH? – If we looked above at the stats provided by the manufacturers we might come to different conclusions that we got from actual Skidmore testing. Again we rated forward torque only, not nut busting torque or reverse torque which are naturally higher stats. Makita was our clear winner in this test, numbers don’t lie over several test the results averaged 15-20% higher than the other 3 cordless impact wrenches.

BATTERY LIFE – After testing on the Skidmore and doing several lag bolts with each to get a feel for performance we did a No Load battery runtime test by zip-tying the triggers down. This is definitely a bit of a flawed measure so take it as you will. The results may be very different competing in real world use or in a high torque test but wanted to provide some basic measure for battery life. Under No Load the results were in this order from shortest to longest runtime: Makita, Ingersoll, Milwaukee and Dewalt as the longest runtime. All were within a 12 minute window, all running over an hour (under no load) so pretty close battery life, actually surprising for the IR which was is the only non-brushless in the test.

CORDLESS VS PNEUMATIC IMPACT WRENCHES – There are a ton of reasons that might eliminate a cordless or air impact option for you, no air compressor on the job probably the most obvious. Air hoses provide a trip hazard and restrict movement, on the other hand the air tools weight significantly less (CP 4.02, Jet 4.2, IR 4.65 lbs) if you are going to use it all day. We are however seeing many people in shops with full air system switching to cordless impacts anyway so we really just wanted to see how do the top cordless and top air impacts stack up against one another in power output. 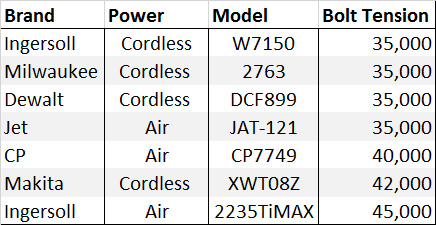 CONCLUSION – Of course you will have to make up your own mind when trying to pick an impact wrench for your job, we just wanted to provide some base line measure for torque output that might be helpful in selecting your next tool. We also wanted to see how are numbers compared to what manufacturer’s provide and see if cordless can keep up with pneumatic.

*NOTE ON TESTING ACCURACY – This Skidmore (1-1/4″) was calibrated within the last 6 months and our focus is on the relationship between the 7 tools and consistency. For all our torque testing we use an 8 second count to build pressure so the time is consistent across each tools testing. If we allowed the tools to build pressure until they could no longer “move the needle” we are confident we would see higher torque numbers, which is no doubt what each manufacturer does when posting their higher stats. This isn’t wrong, however adds to the confusion of “working torque vs max torque”. For our comparison testing however we feel this is less accurate, as 1 tool might build pressure 12 seconds, another tool 18 seconds and comparison testing overall would less accurate. In the real world 8 seconds for a single bolt is actually a long time, if you’re don’t believe us just ask any bull rider.

If you have additional questions give the pros at Ohio Power Tool a call 800-242-4424 and they would be more than happy to help answer any questions about cordless impact wrenches or pneumatic impact wrenches that you might have.