Every holiday season it seems like the big boxes put serious pressure on all the name brand Power Tool guys to make the cheapest possible cordless tool kits and accessory bundles to hit their price points. They’ll pack them with older SKUs or lower amp batteries or throw in stuff that doesn’t always make sense all in an effort to show a “better deal” often targeting consumers that might not know the difference. We thought we’d take a different approach to find deals that make sense for PROFESSIONALS who know their stuff, to find the best deals on the latest and greatest stuff at all price levels. Use Coupon Code = GIFTGUIDE at Ohio Power Tool to receive Free Shipping on any of these specific items!! 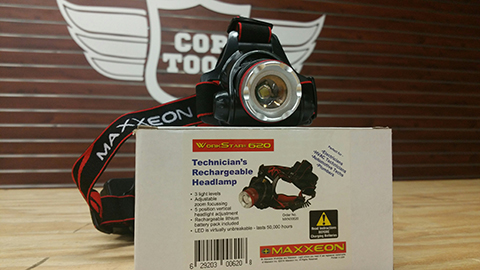 When working in tight spaces or needing both hands free many pros turn to the headlamp, one of the best on the market we have found is the Maxxeon WorkStar 620 ($32) it puts out up to 800 lumens which can light up any works space and actually way too much if you are working around others (also 400 & 200 lumen settings). Built in lithium ion battery can easily/quickly recharge and light steam is adjustable up to 6:1 for a near laser spotlight towards the distance. Great mix of performance and value.

Another favorite light for the pros this holiday season is the M12 Metal Flashlight which for a limited time comes packed with the 2.5” knife from the new Hardline Knives series. This special Holiday Kit 2355-20KN ($99) is a great deal as the M12 light alone is normally $99 and the Hardline Knife another $59! Both are new for 2016 and either would make a great gift, shopping for 2 pros, by the kit and split them up! 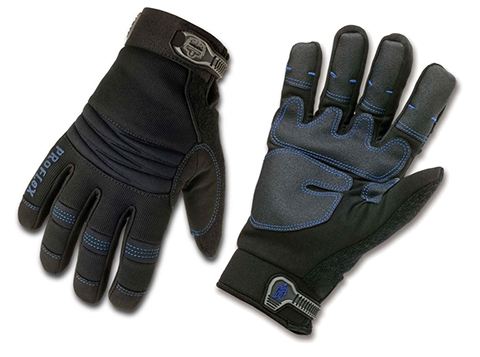 Your hands might be one of the most important tools in the arsenal so shouldn’t you protect them! In the winter time a good quality thermal work glove that is waterproof can make all the difference. They need to be thin enough to retain the control but warm enough to keep the feeling in your hands so you can do the job better. The Ergodyne 818WP ($29) updated for 2016, are one of the best examples we’ve used that finds that balance. Using 40g 3M Thinsulate to retain heat without the bulk, also you can dip you hand in a bucket of water without getting wet. All with the abrasion resistance and toughness to truly handle most jobsites. If you don’t need waterproofing, try the 814 ($16) for similar thermal protection and toughness but a little lower price.

The BLAZE sound more like a comic book character than a new tool but the new Bosch BLAZE GLM20 ($39) is an extremely handy and accurate laser measurer. We’ve done some serious testing with the Bosch laser measurers and found them to be as accurate (if not more so for some cases) than tape measures. At this price point, simple 1 button operation, super compact design and 65’+ range for most people this covers everything you’d need! 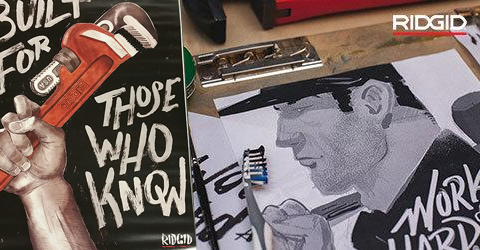 A tradition that has been around longer than myself is the RIDGID Calendars, for the 2017 year we will however provide fair warning the Pinup girls are gone and replaced with artist renderings of pipe wrenches. Perhaps this means you can now hang up the calendars again at your work place, as the pinups had been banned at some. Others may be furious to break the long standing tradition, good news is at only $6.99 with free shipping so they are a great price, FREE if you order any other Ridgid items from OPT.

Too Big for the Stocking Deals 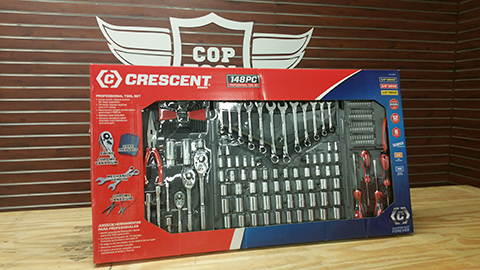 We are not recommending Crescent Tool sets as a professional mechanic “goto” tools, these compact kits are very handy as Knockaround Tool Set. For under the seat in the truck or a backup on the job or the set you’d be willing to lend out. At only $49 the 70 piece kit CTK70MP has a lot of handy tools, CTK148MP ($84) & CTK170MP ($99) obviously just expand kits from there. Again these are very much big box deal bait tool kits but serve a purpose for pros and home owners alike. If you want an upgraded portable set, GearWrench 80940 ($259) is a nice option. 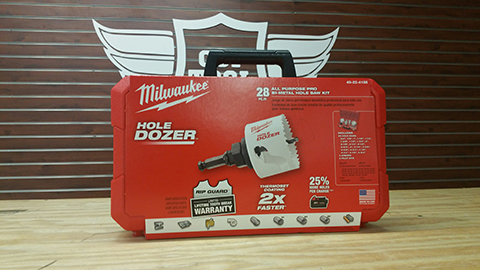 Cordless Tools for the PROS

If you are fan of Milwaukee M18 their focus this holiday season is on the new 9.0Ah batteries several of the best deals are going to focus here, see our previous Milwaukee 9.0Ah Deals post. The other 2 big offers which should go through the holidays are the FREE M18 Fuel Sawzall with these M18 Combo Kits and the Free M18 5.0Ah Battery with all these M18 FUEL Kits. There is also a handful of E-Rebate Deals worth a closer look, different free goods on each. Free Shipping on All M18 FUEL cordless. 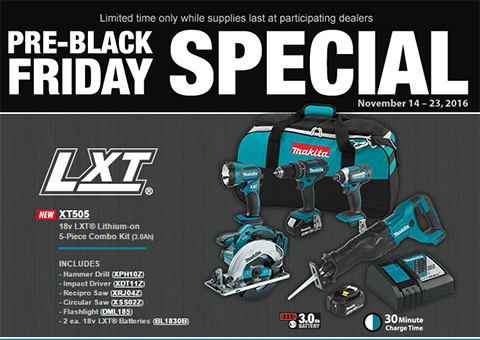 For the Makita fans there are also some nice deals, while there are no deals on brand new Black Sub-Compact 18V Kit CX200RB ($229) it’ll probably one of the most popular kits this season and we think a great value as is. With either the XT252TB or XT257TB you’ll get a free 18V Brushless Grinder ($169). Also there is a Makita $25 off $100 which applies to dozens of other cordless tools. One of the big deals for “Pre-Black Friday” now until 23rd, is the 5 Tool Combo Kit XT505 for only $299! Great deal but this is one of those kits with older brushed 18v tools, non-LED light and 3.0Ah batteries, for the price we still like it. If you are looking for a Makita 18V Brushless combo, stay tuned until Black Friday!

Bosch is also going smaller for this holiday season, with the launch of the 18V Compact Tough there are some aggressive deals on new kits which include these new drills with the Socket Ready impacts we have been a big fan of. They have a similar Bosch $25 off $100 with select corded and cordless tools alike.

If you are fan of Dewalt their cordless focus is going to be on the new FlexVolt Line up with some price drop on 2 Pack of FlexVolt Batteries at $199 and a $100 drop on the FlexVolt 12” Miter Saw to $699. The yellow team also does a Dewalt $25 off $100 deals similar to Bosch and Makita. The one thing we really want to see under the Christmas tree however is the Dewalt Power Station DCB1800, run 120V anything off Dewalt batteries, very smart!!

Last but not least our friends at Metabo have really come on strong for 2016 in the cordless category. They have really focused on the higher-end tools and specifically cool stuff in the cordless metal trades. Cordless Bevellers, Larger 6” & 9” Cordless Grinders, Cordless Metal Finishing and much more! Stay Tuned there may be some coptool for some holiday cordless kits!

Corded Tools for the PROS 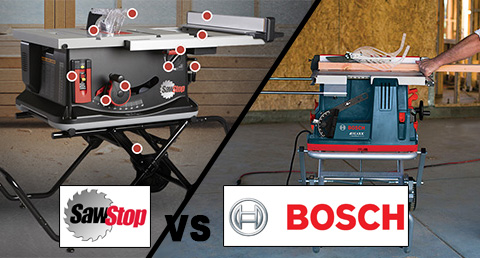 One of the great advancements in recent times is the table saw that will detect flesh and stop the saw in a instance protecting the user for serious bodily harm. SawStop has been the name in this category and done a great job not only making us safer but also building one of the best class of cabinet table saws. This holiday season is the first time SawStop has their JobSite Saw JSS-MCA ($1399 shipped, $1299 in-store) a much more mobile and less expensive option with the great same safety features. It’s a very well built jobsite saw! This season is also the first time SawStop has had any competition in the space, the Bosch Reaxx ($1499) is also now available, which includes FREE Shipping and a 18V Compact Tough drill/driver kit ($199, mail-in).

Looking for other Woodworking Equipment check back November 23rd for some possible Jet Tools and Powermatic deals. We can’t confirm or deny anything but if the past couple years have been any indication hopefully you won’t be disappointed! 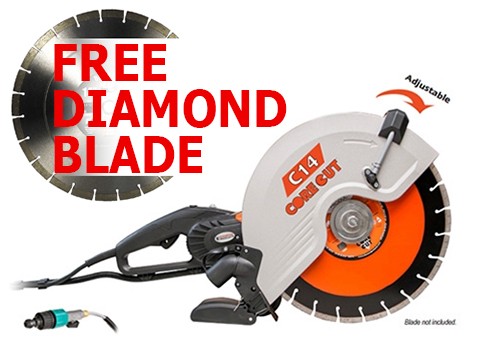 If you do any work cutting concrete and are worried about the upcoming OSHA changes for Silica Dust the Core Cut C14 ($599) is one of our favorite new saws for cutting concrete period. It’s a 14” electric so it can be used indoors or outdoors, it’s got great power and a dummy light to let you know when you’re about to trip the circuit. It can be used wet, with water hookup and has built in GFCI. For dry cutting this is one of the best saws on the market, even though it has a dust port, we would recommend the C14 Sled vacuum attachment ($99) which catches pretty much all of the dust for compliance after the rule changes in June. End of the year is a great time to invest in yourself and your business! Through the end of the year FREE 14” Diamond Blade with every saw ($80 value) and Free Shipping!

If you are in the market for a new WormDrive Skil Saw they are also doing a SKILSAW $25 off $100 which is good on most of the new saws they have launched in recent year. Including the 10-1/4″ SawSquatch, 8″ metal saw Outlaw and several other new saws.

Of course these are just a few of the many many awesome deals and gift ideas out there. More with be popping up on the TOP DEALS page almost daily from here on out! Again Coupon code = GIFTGUIDE will get free shipping on any of the specific items mention above from Ohio Power Tool, if not already shipping free!