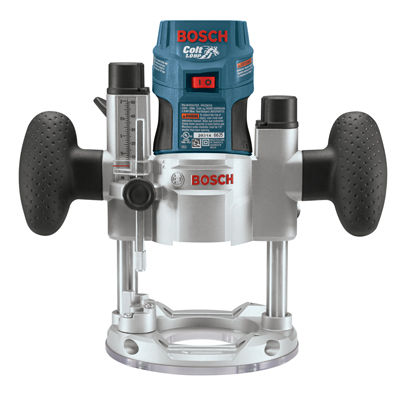 It seems that ever since Bosch released their Colt Palm Router, the people who bought it have been clamoring for a plunge base accessory for the tool. Bosch has been talking about the plunge base for the Colt for a few months, and has even gone as far as to release production models to other members of the tool blogging community for review. Now, with no further ado, the plunge base for the Bosch Colt Routers is available for purchase at authorized Bosch BSS distributors. 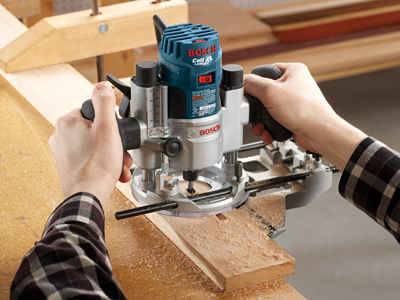 The Colt Router was released seven years ago, and over the course of the past seven years it has acquired a sizeable number of fans and users, particularly among DIYers making their first router purchase. Its small size and light weight make it great for light-duty routing jobs, and its low price in comparison to other, heavier-duty routers have made it a very popular tool. However, Dewalt/Porter Cable and Makita have since released similar compact routers that not only come with slightly beefier motors, but also include a bevy of available accessories (including plunge bases). The Makita tool even comes with a lunchbox to hold all the nifty add-ons they included with the tool! In our review of compact routers you can see the Bosch Colt is alone and left out when compared to the Porter Cable and Makita due to its lack of plunge base. So, with Bosch’s Colt already owning a sizeable portion of the market share, and their competitors releasing similar products with fancier accessories, the next logical step for Bosch is to fill the void left by their non-existent plunge base. You can see this Bad Larry in action in the video below (courtesy of ToolSkool.com), and if you watch carefully you might even spot our friend Rob Robillard of AConcordCarpenter.com.

You can read the full press release by Bosch below, and you can find your new Bosch Router Plunge Base PR011 ($99.99, Ohio Power Tool)   and the kit containing both the router and the base, the Bosch Colt VS Palm Router Kit (199.97, Ohio Power Tool) at OhioPowerTool.com.

Building on the success of the Bosch brand’s signature ColtTM Palm Routers, Bosch Power Tools is releasing the PR011 Plunge Base, and PR20EVSPK combo kit, to deliver the ultimate in precision plunge base routing. Woodworkers of all types will appreciate the features the plunge base offers, including its enhanced control, accuracy and power for slot cuts, decorative band, wood inlay cuts and more.

A staple in the market for more than seven years, the Bosch PR20EVS ColtPalm Routers quickly became some of the most popular routers for remodelers, custom furniture and cabinet makers, store fixture manufacturers, countertop and laminate fabricators and general carpenters. The PR20EVS fixed-base model’s 5.6 Amp motor and variable-speed dial quickly won users over as they could easily adjust their speed depending on the material and application. A soft-start feature reduces start up torque and Constant ResponseTM Circuitry monitors and maintains desired RPM, delivering consistent performance.

The new PR011 Plunge Base is designed to expand the versatility of the Bosch palm routers. The PR011 offers exceptionally smooth plunge action and simple microfine depth adjustments with depth scales printed on the tool in both inch and metric measurements. The plunge base offers fast and accurate depth setting with a 7-step depth stop, two of which are adjustable.

The PR011’s plunge lock lever is conveniently located near the left handle and springs to the locked position when released, as most users prefer. A clear sub-base allows woodworkers to see their work piece at all times, and the unit’s precision centering design makes it easy to adjust the subbase to keep a bit on the intended cut line when using jigs, templets, dovetail fixtures and other guidance devices.

The PR20EVSPK combo kit includes the router motor, fixed base and plunge base. Both bases feature ergonomic, soft-grip areas for comfortable use and enhanced control. A tool-less motor clamp allows users to quickly remove the router from the bases with ease.